SWEDETECH VICTORIOUS AT STREETS OF WILLOW

SwedeTech Racing Engines brought home two wins and multiple podiums at the Streets of Willow, the second round of the SuperKarts! USA (SKUSA) California ProKart Challenge. The sprint style racing on a typical road racing course was a great success for the California engine builder and their 22-driver roster. The SwedeTech Racing Engines team was on-site at the event delivering trackside support to all of their drivers, ensuring they had the proper attention needed to run at the front of the field. 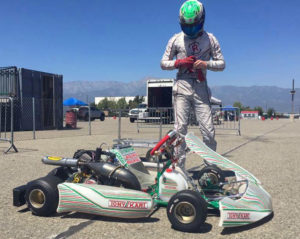 With all 125cc gearbox powered karts grouped together but scored seperatley, a total of sixty-nine drivers would hit the track each and every shifter session. The S1 category saw four SwedeTech drivers take to the track for the event. Pure Karting driver Kolton Griffin led the field all day, taking the pole in his qualifying run, followed by victories in both heat races. In the final, Griffin led the entire race up until the last lap, and would cross the line in the second position. Team drivers Brian Keck and Jimmy McNeil were top-five contenders throughout the heats, and earned top-ten finishes in the day’s final. Aluminos driver Hunter Pickett drove consistently all day and earned a fourth place finish at the end of the day.

Kol Bailey from Leading Edge Motorsports, piloted his SwedeTech powerplant in through the field in S2. Suffering a flat tire in heat one, Bailey drove his way back into the top-five in heat two. Starting fourth in the final, he worked his way up to a second-place finish. Mike Schneider would also throw his hat in the mix in the S2 class with a solid pair of heat races results finishing third and second respectivley. Shooting for a class win, Schnieder would end his day just outside the top-five in the sixth position.

S3 driver Zach Pettinichi piloted his SwedeTech powered VRP Tony Kart to a third place finish in heat two, moving his way through the field to earn a victory in the main event. Darrell Tunnel and Ken Schilling showed speed all day in the S4 Super Masters category. Schilling scored fourth in the final, followed closely by Tunnel with a sixth-place result.

In S4, SwedeTech drivers swept the top-five in both heats and the main event. Rob Logan of Nash Motorsports brought home the victory in his SwedeTech powered CRG, followed by Curtis Cooksey from Acceleration Karting in second. Nick George rounded out the SwedeTech-dominated podium in third, with Nick Firestone and Terry Lawerence earning fourth and fifth place, respectively. Competing in the S1 class, Brian Keck would start shotgun (69th) on the field in the shifter kart main event and have the drive of the weekend, passing 59 karts for a tenth place finish overall.

SwedeTech Racing Engines is now looking ahead to rounds three and four of the Pro Tour, SKUSA SpringNationals, at their home track in Sonoma, California. They now offer IAME X30 packages for SKUSA competition. For more information on SwedeTech, please contact them at 916.687.3980, email Info@SwedeTechRacing.com or visit them online at www.SwedeTechRacing.com.