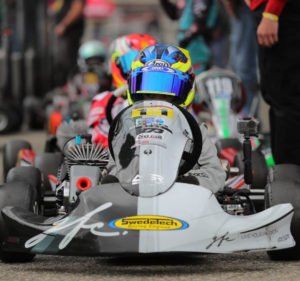 Not married to any specific chassis brand, SwedeTech Racing Engines powered multiple drivers to the podium at the most recent round of the ROK Challenge of the Americas. Gaining momentum as the series crossed the halfway point, the leading kart engine building company is aiming for more results at the final event of the series at their home track at Sonoma Raceway.

“Again, another huge thanks to all of our teams and drivers for their hard work and support,” explained Reine Persson. “We have a number of drivers battling for the series championship and will look to assist them in achieving their early season goals by taking advantage of home track knowledge and experience.”

SwedeTech powered drivers took nine positions in the top-ten of Saturday’s ROK Shifter main event and swept the podium during both days of competition. Leading the way was Jake French (BirelART) as he claimed both victories to put SwedeTech on the top step of the podium in the biggest class on the weekend. A trio of GFC drivers in Brenden Ruzbarsky, Kol Bailey, and Cole Shade finished second through fourth with William Ferguson (Kosmic) rounding out the top-five. Sixth through eighth positions were also controlled by SwedeTech powered drivers with Mark Snyder (FK), Hunter Pickett (GFC) and Worawong Komaracul (GFC) while Jace Denmark-Gessel (OTK) finished tenth.

French returned to the top step of the podium on Sunday to sweep the weekend while Pickett improved from his Saturday result to finish second. Cole Shade added his second third place result in as many days while Bailey added a fourth-place finish on Sunday to his resume. Finishing eighth on Saturday, Komaracul climbed into the top-five on Sunday to finish fifth.

Taking the win in the ROK Senior main event on Saturday was Airel Jiminez (DR) as three SwedeTech Racing Engines drivers finished in the top-five. Bijoy Garg (Exprit) narrowly missed the podium in fourth while Liam Letzsch (FA) rounded out the top-five. Derek Wang (FA) added a win to the SwedeTech resume taking the ROK Masters win on Saturday en route to the fastest lap of the race. Sunday saw Wang return to the podium in second. 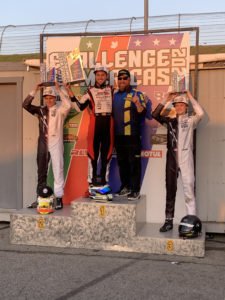 Nico Sarphati (GFC) added another pair of victories to his Micro ROK total for the season taking the checkered flag in both Saturday and Sunday’s main events. Looking to take the series title, the young driver will now shift his focus to the third and final round as he looks to continue his win streak.

Nick Firestone (GFC) was able to put his machine on the second step of the podium in ROK Shifter Masters as Ryan Yop (Tony Kart) put two SwedeTech powered drivers in the top-five. Returning to the track Sunday looking for a vengeance, Yop took control of the main event and drove to victory to cap off his weekend of competition.

With a stellar drive on Sunday, Macy Williams (FA) rocketed her way forward to second place result in ROK Junior. Working hard to find the necessary pace to be at the front of the field, Williams had an excellent drive on Sunday to stand on the podium.

With six wins on the weekend, full focus moves to the Sonoma event for the series finale.

“We now will prepare for the final round to provide our teams and drivers with the maximum engine advantage possible,” explained Persson. “Our goal is to win and nothing less.”