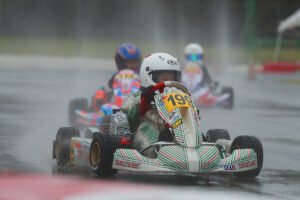 In a weekend that featured changing conditions throughout, Supertune drivers consistently found themselves at the front of the field during the second event weekend of the ROK Cup USA Florida Winter Tour at the Ocala Gran Prix (OGP). After rain, wind, cold and sun, Jorge Ortiz emerged with a podium result in Junior ROK as a pair of Supertune drivers claimed top-ten finishes in Mini ROK.

“We looked to be in contention for the win and a possible double podium result in Junior ROK until the last lap of the main event,” explained Ben Cruttenden. “Noah Baker led the majority of the final but was involved in a last lap incident that ruined the chances of many good drivers. Jorge Ortiz was able to avoid the carnage and come home with a podium, but I think we could have been first and third in the end.”

Ortiz would have an impressive run when the wheel-to-wheel action commenced as he gained more positions than any other driver on the weekend. After qualifying in the 23rd position in the wet, Ortiz drove forward in the heats to earn a fourth and a seventh-place results when the sun came out and improved seven more in the prefinal to finish fourth. Starting Sunday’s main event from the outside of row two, Ortiz took advantage of the on-track positioning and secured a second-place podium result, his first podium in Junior ROK in 2021.

Noah Baker improved throughout the weekend turning his ninth-place qualifying effort into seventh, third and second place results before finishing second in the prefinal. Jumping the lead in Sunday’s main event and looking to have a podium in the bag, Baker was involved in an incident four corners from the end that forced him down the running order and eventually classified in the sixth position.

In the Mini ROK class, it was Diego Ardiles and Karsyn Walters that found themselves with top-ten finishes on Sunday. Consistently in the top-eight throughout the ROK Cup USA weekend, the pair started the Mini ROK prefinal from second and eighth respectively to finish fourth and ninth. Challenging in the top-five in Sunday’s main event, the pair finished eighth and ninth as they shift their focus to round three in only four weeks’ time.

Senior ROK driver John Burke had a trying weekend but when it went right in the final, he proved his prowess and speed of the Supertune Tony Kart as he drove into the top-ten. After multiple incidents in the wet, the highlight of Burke’s weekend up to Saturday was a tenth-place result in heat three as he showed the pace to run with the top half of the time sheets. After failing to finish the prefinal and starting the main event in P19, Burke was able to advance forward eleven positions to finish in the top-ten, ending his weekend with some momentum and an eighth place finish and sixth fastest time all while battling through the field.

With a few short weeks off, Supertune will return to Ocala Gran Prix for back-to-back weekends in March. Kicking off the United States Pro Kart Series March 11-14, the Indianapolis based program will look to close the Florida Winter Tour the very next weekend with winning results.

For more information on Supertune, race team opportunities in 2021, OTK product sales, or engine and dyno services, please contact Ben Cruttenden at 317.900.3141 or via email to Ben@Supertune.us.