SUMMER BREAK AND FORMULA ONE TEST FOR JUAN MANUEL CORREA 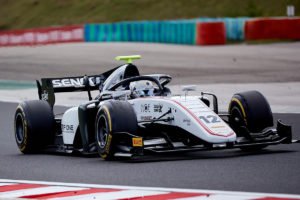 It was a difficult weekend at the Hungaroring for American driver Juan Manuel Correa and his Sauber Junior team program. Ending the Budapest event with two fourteenth place finishes, the American now enters the three-week summer break ahead of the next FIA Formula 2 event at the end of August but will be behind the wheel of an Formula One Alfa Romeo Racing machine on the 24th of this month.

With rain dampening the race surface on Friday, Correa and the rest of his competitors were forced to qualify in wet conditions. Taking on a tricky and slick race circuit, the young American drove the FIA Formula 2 car for the first time in wet conditions as he gained experience and came to grip with the different compound of tires.

“We qualified in the twelfth position for race one as conditions were not ideal. The qualifying session was quite tricky with rainy conditions and fully wet. It was my first time driving in the wet in this car, so I had to take some time to get used to it and understand more than anything the tires,” explained Correa. “If it rains in the race, I think we will have pretty good pace on the longer runs so not just the one lap run that we have been having.”

Starting 12th on the grid and trying a different strategy from others, Correa’s race did not go as planned as he ended race one in P14. Disappointed with his finish and lack of pace compared to his rivals, the Charouz Racing System squad went to work and poured over data and video to improve the car’s setup for Sunday.

“Our strategy did not work in race one but some people were able to make it work,” explained a disappointed Correa. “With the prime tires, we lost a lot of time compared to the other drivers doing the same strategy as me and that is really where the race got away from us. After that, we put on the options for the last ten laps and we were fast, but the other drivers were too far away from us by that point. Pretty disappointing.” 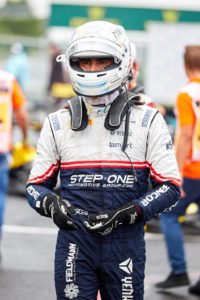 With a fourteenth place result on Saturday, Correa was hoping for some better results on Sunday. Starting his final wheel-to-wheel action of the weekend from outside row seven, Correa attacked early, but was unable to advance up the grid. Suffering from major tire degradation on a track that was increasing in temperature, Correa was only able to maintain his on track position, but was upbeat about handling changes made to his car between races one and two.

Correa continued, “The second race of the weekend was more positive than yesterday as the changes we made to the car helped it in the way that we were expecting. In the beginning of the race I pushed slightly too hard and I paid for that in the closing stages losing grip in the rear tires. Knowing that it was going to be difficult to pass throughout the race, I decided to try and attack in the beginning but it did not pan out for us today.”

With a few weeks off for the European summer break, Correa is anxiously awaiting his first taste of Formula One. Confirmed to be testing with Alfa Romeo Racing on August 24th, Correa will step behind the wheel of one motorsports’ most technologically advanced racecars at the Circuit Paul Ricard in France.

“To say I am excited is an understatement,” exclaimed Correa. “A test and a career in Formula One has been something that my partners and I have been working on for quite some time. I will take it all in stride, listen and learn all while gaining as much experience as possible.”

With his first ever Formula One test set for August 24th, the next event of the FIA Formula 2 calendar takes place August 30 to September 1 at the Circuit de Spa-Francorchamps in Belgium. Visit the www.FIAFormula2.com to follow all the weekend’s action and stay tuned to the Juan Manuel Correa social media pages for photos, results, news and information.