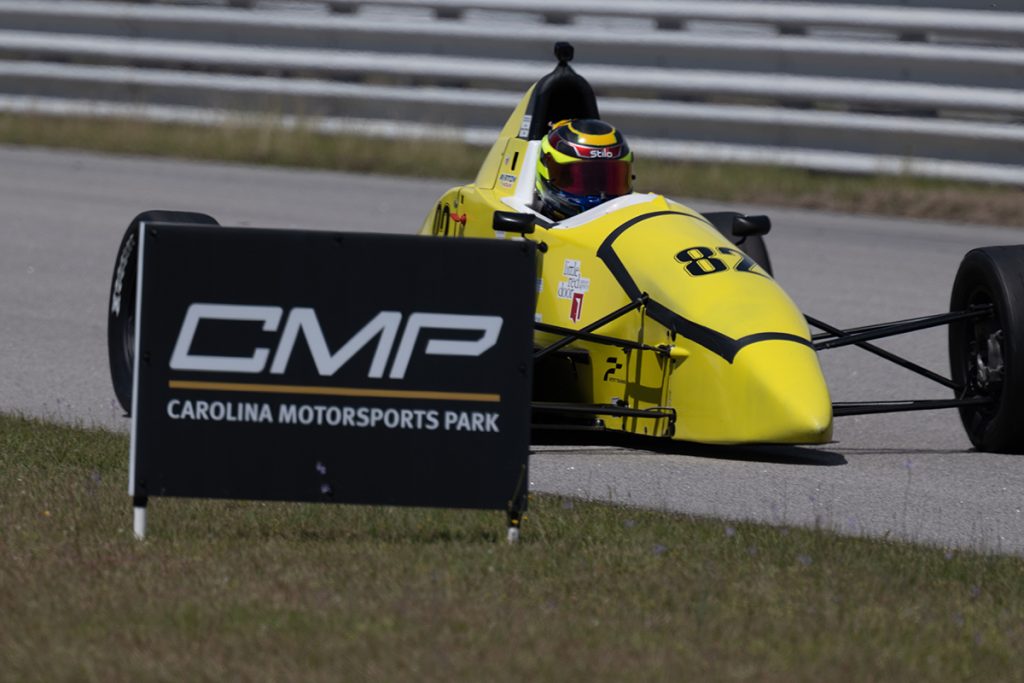 The 2022 Formula Race Promotions season is now underway. A successful start for many of the FRP classes happened this past weekend at the Carolina Motorsports Park (CMP) facility in Kershaw, South Carolina. With the F1600, F2000, F1000 and Formula Vee classes on track, the racing that FRP has been known for was front and center as close finishes and wheel-to-wheel action highlighted the race weekend.

“It was good to be back at the track and see the FRP family,” explained Series Co-Owner Bob Wright. “Many new faces, along with many returning drivers were able to get their season underway. We welcomed new race winners and new drivers to the podium. Additionally, we would like to thank Team Pelfrey for sponsoring and hosting an impromptu team and competitor gathering on Saturday night as a ‘Welcome Back to the Race Season’ get together. This is truly what the sport is about.”

The on track action was highlighted by the F1600 field as close finishes and hard racing carried from the end of the 2021 season onward into 2022, again seeing strong powerhouse drivers from Team Pelfrey and Rice Race Prep, as Bob Perona flexed his muscles in F1600 Masters.

Nathan Byrd showed his prowess throughout the race weekend taking victories in both F1000 and F2000. 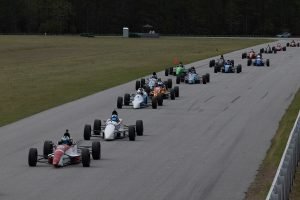 The first F1600 race of the weekend started with plenty of adrenaline and drama as the green flag went to double yellow in turn one of the race after Rob Albani tagged Joe Colasacco from behind putting Joe out of the race. On the lap three restart, front row starters also entangled in turn one, when Hugh Esterson tagged Thomas Schrage, putting them both on the sidelines. A miscalculation by Will Holtz on lap nine resulted in his rebounding off the turn three tire wall and collecting Jonathan Lee.

After a shortened race, Ayrton Houk was on the top of the results sheets to score the first win of the season, with promising newcomer Nolan Allaer in second, holding off a hard-charging Joey Brienza (Exclusive Autosport) who earned the second fastest lap of the race honors in his drive from sixth to third. Bob Perona crossed the line in the fourth position overall but first of the F1600 Masters drivers to take his class win with Callum Baxter (Britain West Motorsports) rounding out the top-five, just ahead of Porter Aiken in sixth overall and fifth in class. With Perona taking the class win on the Masters side of the program, multi-time series champion Scott Rubenzer earned the second step on the podium to kick off his 2022 race season. Rob Albani joined Perona and Rubenzer on the podium in third ahead of John Dole (Dole Racing) and Sam Lockwood (Raceworks).

With the fastest lap setting the grid for race two, Jonathan Lee began his quest for a race win from the pole position but would eventually end race two in the eighth position. Rising to the top was round one pole position winner Thomas Schrage as he drove his Rice Race Prep machine to the front of the field to earn his first win of the season. Race one winner Ayrton Houk crossed the line in the second position earning his second podium result as he led the Team Pelfrey contingent. Huge Esterson found his way back to the podium with an impressive drive to P3 after his race one issues, while Bob Perona crossed the line fourth leading the field of F1600 Masters. Exclusive Autosport driver Joey Brienza finished fifth on track but fourth in class, just ahead of Callum Baxter. With Perona doubling up on the F1600 Master wins on the weekend, it was Joe Colasacco and Rob Albani who joined him on the podium in second and third with Scott Rubenzer and Sam Lockwood rounding out the top-five. 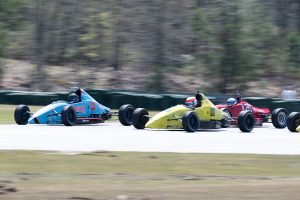 Thomas Schrage capped off the third F1600 race of the weekend as he outpaced Ayrton Houk for the top position in the short twelve-lap sprint style race. Bob Perona continued to be the man to beat in the F1600 Masters class with his dominating performance, finishing third overall and scoring his third Masters race win of the weekend. Fourth on track but third in the F1600 class was another Team Pelfrey driver, Nola Allaer, as Joey Brienza continued his presence at the front of the field with a fourth place finish ahead of Callum Baxter who added another top-five. Joe Colasacco was second in the F1600 Masters class joining Perona on the podium with Scott Rubenzer scoring his third podium result of the weekend in P3. 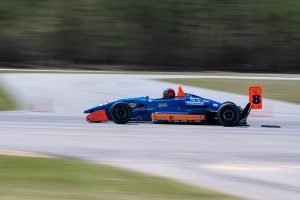 Facing some new competition in the F2000 class, 2021 season multi-time race winner Austin Hill put his name on the top of the F2000 results sheets during the first race of the year. After scoring the pole position, Hill went on to secure a dominating race win in the 20-lap wheel-to-wheel race. 14-year-old newcomer JT Novosielski was the best of the rest climbing from his inside row two starting position to stand on the second step of the podium while veteran F1600 driver David Adorno, in his first foray into F2000, earned a solid podium result in third. Nathan Byrd, doing double duty along with his F1000 effort, only completed 18 of the 20-lap race but was able to secure the fastest race lap en route to being classified in the fourth position, just ahead of Tommy Cadwalder in fifth, also an F1000 double duty driver. Wright was a non-starter due to a brake issue discovered just before race time.

After taking the checker flag in race two, Nathan’s car was determined to be underweight, creating a race one podium repeat with Austin Hill in the number one spot, JT Novosielski in the second position, and David Adorno in third. Robert Wright, still fighting mechanical issues finished fourth, while Tommy Cadwalder also with mechanical issues ended his first 2022 F2000 effort with a disappointing DNF.

With younger newcomers and additional cars joining at Mid-Ohio, the F2000 class is regaining its competitiveness and is shaping up to be and exciting FRP class in 2022. And watch for a strong showing from the double duty Ironmen of the Arrive Drive Motorsports Team in their second F2000 effort at Mid-Ohio. 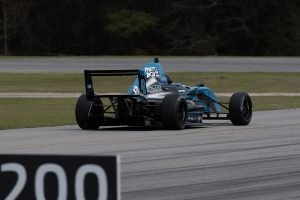 In the first F1000 wheel-to-wheel action of the season it was Nathan Byrd who advanced forward from his outside row two starting position to top the podium blocks. Moving to the point over the 21-lap race, Byrd scored his first victory of the season and put Arrive Drive Motorsports on top in F1000. Pole position winner and fastest lap of the race honors went to Shane Prieto, who was able to steer his entry to a second-place result, as Stephen Hamilton fell one position throughout the race to salvage a podium result in P3. Momentum Motorsports driver Doug Hertz was able to advance forward from fifth to fourth in in race one as Tommy Cadwalder finished fifth putting a pair of Arrive Drive Motorsports drivers in the top-five. 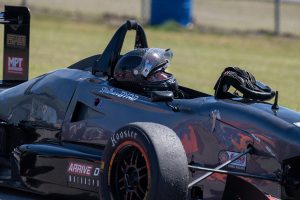 Nathan Byrd doubled up on his F1000 weekend victories as the Arrive Drive Motorsport driver topped the podium at the end of the second F1000 race on the weekend. Leading the way and showing his goal of the F1000 championship, Byrd claimed the victory in the eighteen-lap event en route to the fastest race lap. The second and third place finishers from race one, Shane Prieto and Stephen Hamilton, held their positions in race two to finish second and third as the top three remained unchanged from day-to-day. Tim Pierce was the best of the rest as he slotted into the fourth position ahead of Tommy Cadwalder in fifth.

With the first race weekend of the 2022 season now in the rear view mirrors, Formula Race Promotions participants can shift their focus towards the end of the month. Taking place over the April 29-May 1 weekend, FRP will host their second event weekend of 2022 at the famed Mid-Ohio Sports Car Course. Please be sure to get registered by clicking HERE.

Please remember that all series news, information, results, photos, and PR will be communicated through our social media pages listed below. Please be sure to tag FRP in any posts to help us have the ability to promote you. 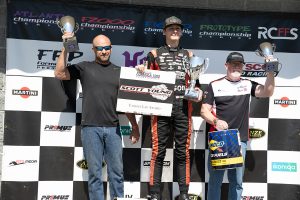 For more information on any of the Formula Race Promotions promoted series, please visit www.FormulaRacePromotions.com. For questions, comments or concerns, please feel free to reach out to Bob Wright RobertW@RaceFRP.com or Clay Hutchinson ClayH@RaceFRP.com. For media inquiries, please contact us via email at Media@RaceFRP.com.