The fourth round of the World Karting Association (WKA) Manufacturers Cup brought another solid performance for the Indianapolis based Top Kart USA squad. Taking place August 19-21 at Pittsburgh International Race Complex, the results for the team were consistently strong all weekend with five wins and fourteen podiums added to their already stout 2016 resume.

“With ups and downs during the course of the weekend, the Top Kart drivers had many more ups on track outweighing the downs. With a total of five final event wins on the weekend paired with 14 overall top three podium finishes, we had a fantastic weekend of racing!” stated Blake Deister, co-owner of Top Kart USA. “I cannot thank the families and teams that have proven yet again that the Top Kart chassis line is a high performance chassis capable of being competitive at every level and class.” 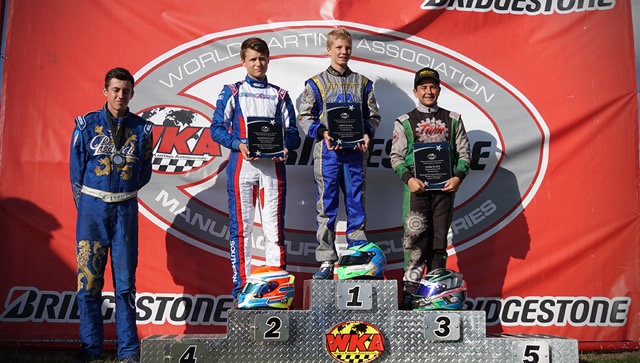 During the weekend at Pittsburgh, Top Kart drivers showed strong results in Yamaha Junior, sweeping the podium both days. JP Southern Jr. took the win on Saturday, making this his fifth final event win of the year since his injury last November. He finished second on Sunday to round out a great weekend. Tyler Ferris had excellent results as well, finishing second on Saturday and taking the win on Sunday, his first national win in the Yamaha Junior category. Teammate Pauly Massimino took the pole on Saturday, and finished with a strong third place on both days, rounding out the Top Kart USA dominated podium. Marina Walters was unable to start on Saturday, but came back on Sunday to finish fifth. Top Kart teammates Andrew Patterson and Caiden Young showed solid results, both earning top-ten finishes Saturday and Sunday. Ty Canoles brought home top-20 finishes on both days. Top Kart USA drivers locked in four out of the top-five finishes in this category for Sunday’s final event.

The Kid Kart class would see Tristan Young taking the win on Saturday after securing the pole in qualifying. On Sunday, he also secured the pole but was unable to finish the final. Teammate Karsyn Walters earned a podium spot with a third place finish on Saturday, and finished a strong sixth place on Sunday.

In Yamaha Senior, Dakota Pesek finished fourth on Saturday. On Sunday, Pesek came back looking for better results and secured a win to end his weekend on the top of the podium. Teammate Alexander Kardashian earned a podium appearance on Saturday with a third place finish. He finished fourth on Sunday. Derek Hughes saw consistent results all weekend, bringing home two solid fifth place finishes.

“Coming home with a big win from the fourth stop of the World Karting race at the Pittsburgh Motorsports Complex this past weekend!” said Pesek. “Thanks to Top Kart USA, Woltjer Racing Engines, and L&T clutches for making all this possible and for all the great equipment and track support!” 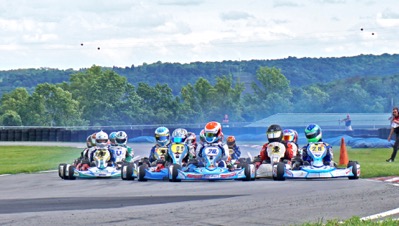 In Pro Swift, Conner Ferris secured the pole on Saturday and earned a third place finish in the final. He finished second place on Sunday, clinching two podium appearances for the weekend. Teammate Madison Campeau earned herself a podium appearance with a second place finish on Saturday. She scored an unfortunate DNF on Sunday. Kaden Wharff was unable to start on Saturday, but came back on Sunday to earn a solid sixth place. Owen Mahle earned two top-15 finishes for the weekend.

In Pro IAME Senior, Alexander Kardashian showed strong results in yet another category, finishing fifth on Saturday and improving on Sunday to earn a second place finish. Teammate Abby McLaughlin scored a DNF on Saturday, and improved to sixth on Sunday. 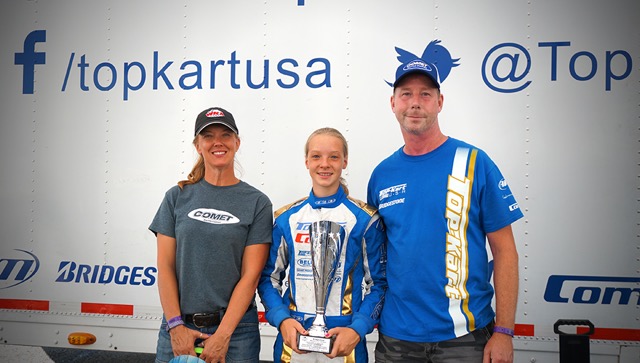 In Yamaha Sportsman, Top Kart driver Madison Campeau had her best drive yet, finishing first on Saturday – her first national victory. After many close second place finishes this year, some just by inches, she finally pulled off the win at Pittsburgh Raceway. She earned another podium appearance on Sunday, scoring a second place. Teammate Kaden Wharff finished seventh on Saturday, improving to a fourth place finish on Sunday.

“We were extremely proud of Maddie’s performance all weekend,” said Michele Campeau, Madison’s mother. “She was fast in both classes. The Top Kart chassis’ were spot on, our motors were great, and all of the support by Top Kart USA, Comet Kart Sales and Mike Tetreault were key in making Maddie’s first national win possible. We hope to continue with this level of performance for the next round of WKA nationals at New Castle Motor Sports Park.”

After a successful weekend, Top Kart USA drivers are looking ahead to the final round of the WKA Manufacturers Cup series, taking place on September 23-25 at New Castle Motorsports Park. Madison Campeau (Yamaha Sportsman), Pauly Massimino (Yamaha Junior and Pro IAME Junior), and Dakota Pesek (Yamaha Senior) all head into the final round with the championship points leads in their respective classes.