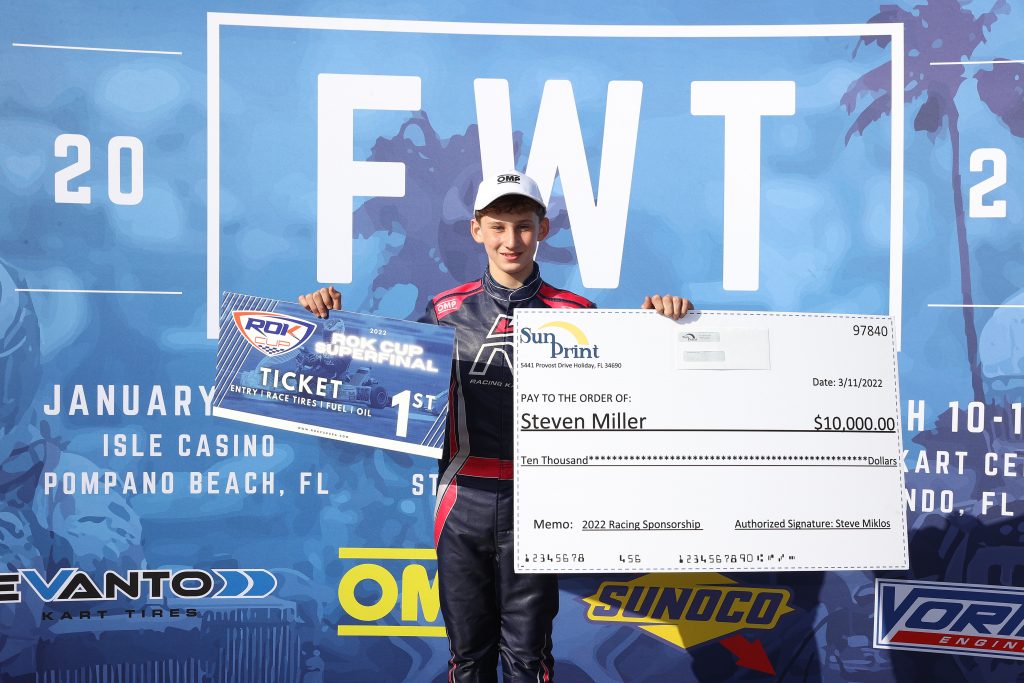 March 14, 2022 – Looking to take his karting program to a new level in 2022, Steven Miller would take part in the annual ROK Cup USA Florida Winter Tour. In a diverse program that featured two temporary circuits in Pompano Beach and St. Petersburg, and one permanent facility in Orlando, Miller piloted his Team CDR prepared OTK Kart to a pair of top-ten results en route to a sixth-place finish in the VLR Junior championship points battle and a big first place win during the final round to bring home the ROK Junior Championship title.

Beginning his Florida Winter Tour campaign at the Isle Casino in Pompano Beach, Florida, Miller and the rest of the ROK Cup USA program would battle a weather filled weekend that would see the schedule adjusted drastically. Set to compete in three heat races, a prefinal and a main event, Sunday’s activities would be cancelled and moved to Saturday with one heat race being taken off the schedule. After qualifying seventh and finishing sixth and thirteenth, Miller would start his prefinal in ninth. Driving forward three spots to come home sixth and earn an outside row three starting spot for the round one main event, he maintained his position to end his first Florida Winter Tour weekend in P6.

Also competing in the ROK Junior class, Miller finished all main events within the top five. After a disqualification in round one qualifying, Miller started the heat races from the tail of the field and finished seventh and 11th yielding him a P9 starting spot for the prefinal. Astonishingly, after finishing seventh and starting the main event from row four, Miller climbed his way to the podium earning a third-place result, his first Florida Winter Tour podium.

Round two would see Miller and his Team CDR program travel to Tropicana Field in St. Petersburg and another temporary circuit. Looking to take what he learned from round one and apply to the second event weekend of the series, Miller qualified in the seventh position and was an immediate threat in the heat races finishing third and fifth before contact in heat three relegated him down the running order to an 18th place result. Starting his prefinal from the ninth position, a finish in the top-ten on track was hindered by a post-race penalty that dropped him to sixteenth. Like the prefinal, Miller was once again able to drive into the top-ten, but another post-race penalty saw him classified 15th when the final results were official.

On the ROK junior side of the program, a fourth-place qualifying effort at Tropicana field turned into three top-five results in the heat races and a third place starting spot for the prefinal. A solid fourth place result set Miller up to challenge for the race win in the weekend’s main event, but in the end, he could only muster a fifth place finish.

Before Miller hit the track in Orlando, he was able to lock in his first major partner for what he hopes to be a long racing career. Welcoming Sun Print to the CDR program, Sun Print jumped on board to sponsor Steven for $10,000 to cover some of his racing expenses. Representing Sun Print as a Brand Ambassador, Miller will carry their logo and colors at all events throughout the 2022 season. Steven added, “This is my first sponsor. I’m really excited, and for it to coincide with a championship win, it is such a feeling of accomplishment.” 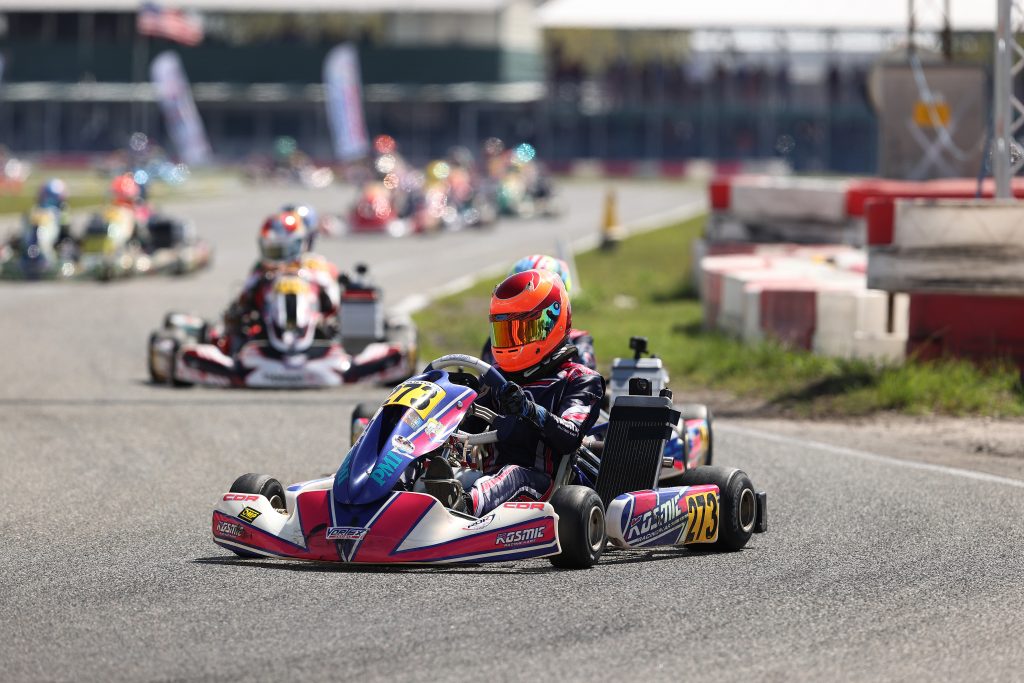 Round three would see Miller travel north to the Orlando Kart Center for the final round of the series, but the first permanent track on the schedule. Much more comfortable with wide runoff areas, Miller proved his speed by qualifying fourth before going second, sixth and fourth in the three heat races. In another weekend that featured changing weather conditions in which competitors would go from dry to wet and back to dry weather tires throughout Saturday alone, Miller seemed to be unfazed by the transitions and continually was close to the front of the field. Earning himself a third place starting positions for Saturday’s prefinal, an advance forward of one position to second set him up for an outside front row starting spot on Sunday.

With cold temperatures and wind on Sunday, Miller would begin his quest for a race win from the outside of the front row. Typically, difficult starting on the outside at any circuit, Miller would be a victim in the first corner as he was pushed wide and down the running order. Despite his speed, drive, and determination to be on the podium, the CDR driver would have to settle for seventh on the ROK VLR Junior class results sheets and a sixth-place result in the series championship points chase.

The Orlando facility showed Miller’s persistence and consistent improvement as he never ran outside the top-six in the 30-kart strong ROK Junior class all weekend long. After a fifth-place effort in qualifying saw sixth, third and fourth place results in the heat races, it was a second-place result in the prefinal and a front row starting spot for the main event. Rocketing off the line and to the lead, Miller held off the advances of a fellow competitor late in the race to take his first career Florida Winter Tour victory in dominating fashion.

“The Florida Winter Tour was one of the most competitive series I have competed at this year, and it was an honor to battle wheel-to-wheel with so many skilled drivers,” explained Miller. “We welcomed a new partner in Sun Print, and it was great to reward them right away. I feel like I’m just getting started and am proud to earn my first FWT championship in my home state of Florida!”

Next up for Steven Miller will be the start of the Superkarts! USA (SKUSA) Pro Tour at NOLA Motorsports Park over the April 1-3 weekend.