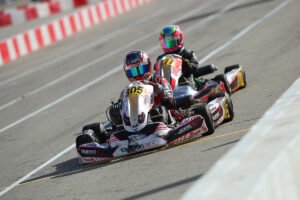 Leading the way for Speed Concepts Racing was the junior contingent of Paul Bocuse and Ayden Ingratta. Competing in both VLR Junior and Junior ROK, the duo flexed their muscles showing great pace and results along the way. Bocuse had a dominant weekend in the class taking the pole position and a pair of heat race wins, but an issue in the third heat that saw him miss the start of the race sent him down the running order and hurt his starting position for the prefinal on Saturday afternoon. Poised and overcoming the setback, Bocuse drove forward to take the win and main event pole position and continued his dominance on Sunday earning the round one victory in style.

Ingratta matched Bocuse’s pace but luck would not be on his side. After qualifying sixth and progressing through the heat races, the young Canadian scored the fastest lap of Saturday’s prefinal gaining five positions to finish eighth. Returning to the track Sunday, Ingratta progressed forward from his row four starting position with ease as he moved into the second position and chased down his teammate and eventual race winner Bocuse. Unable to make a move to safely get by, Ingratta settled for the second position on track, but a start line infraction relegated him five positions on the results sheet to seventh. 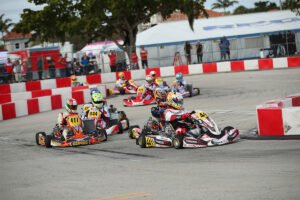 The duo showed speed in Junior ROK as well. Bocuse matched his VLR Junior results scoring the Junior ROK pole position, a pair of heat race wins, and prefinal victory. Starting Sunday’s main event from the pole position, it took two attempts to get the race started as a red flag on the initial start sent drivers into a thirty-minute delay. When the green flag did fly, it was all Bocuse who led from flag-to-flag to take his second main event win of the day and a sweep of the Junior classes. Ayden Ingratta position himself in the top-ten in two of three heat races before finishing 12th in the prefinal but once again, showed his true pace and grit in the main event to advance six positions to finish in the sixth position.

“I am proud of both Paul and Ayden and their performances as of late,” explained Mike Speed. “These two drivers, along with drivers that have moved on to cars, are the perfect example of how the SCR program brings drivers in, helps them improve, and turns them into winners.”

Scott Roberts is always a threat for the win in Master ROK but a difficult prefinal saw him at the tail of the field and classified in the 11th position. Forced to start shotgun during Sunday’s main event, Roberts was the biggest mover of the Master ROK final gaining nine positions to stand on the second step of the podium and bring Speed Concepts Racing another solid result.

Mathias Ramirez would fly the Speed Concepts Racing colors in Shifter ROK and secured a second-place finish at the end of the weekend. After finishing fifth, fifth, and third in the heat races, Ramirez advanced to P2 in the prefinal and held that position through the main event. Having not entered a shifterkart race for years, Speed Concepts Racing proved that they have the driver and package to win. 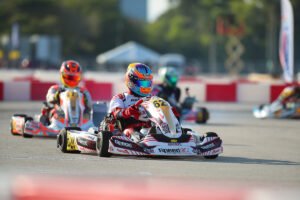 Speed Concepts Racing has the opportunity to add a few more drivers in 2021. Please contact Mike Speed at Mike@Speed-Concepts.com.