Speed Concepts Racing (SCR) has just finished up an impressive double-header at round two of the Florida Winter Tour ROK Cup USA and Rotax MAX Challenge at the Palm Beach Karting facility in West Palm Beach, Florida. With a small roster of three drivers, the two week stint allowed the SCR team to bring home a win, a podium, and multiple top-ten finishes in some of the most competitive racing of the season.

The team started off at the ROK Cup USA portion of the Florida Winter Tour just two weeks ago. Tyler Gonzalez represented the SCR team in the stacked ROK Junior field. He kicked off the weekend with a third place qualifying effort and was ready to battle in the front of the field. After sweeping the heats on Friday and Saturday, Gonzalez was set to start on the pole for Sunday’s prefinal. Once again, he proved unstoppable, bringing home Speed Concepts Racing their first victory. 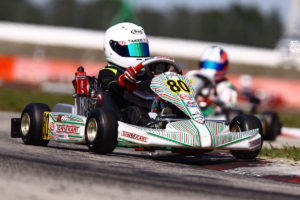 Teammates Alex Powell and Paul Bocuse threw their hats into the mix in the Micro ROK division. Powell started his weekend with an eighth place qualifying run, and continuously ran in the top-ten throughout the heats. On Sunday, he finished sixth in the prefinal, and would start outside the third row for the main event. Racing hard, Powell and his Tony Kart would end the weekend with a fifth place finish in the final. Bocuse struggled in his qualifying run on Friday, but did not let that hold him back in the heat races, improving each session on track. His bad luck returned on Sunday with an unfortunate DNF in the final after issues on track forced him to retire early.

Kyffin Simpson would enter the talent-filled Vortex Mini ROK division and consistently improve throughout the weekend. After qualifying in the 25th position, Simpson piloted his Tony Kart successfully through the heat races with three top-fifteen results. With the combined field together for the main event, Simpson would cross the stripe in 18th.

The quartet returned the next week for the Rotax portion of the Florida Winter Tour ready to battle for an even better showing. Tyler Gonzalez was eager to battle for the win in the Rotax Junior category, earning the pole position in his qualifying session on Friday. He scored one heat race win and two seconds, and would start on pole in Sunday’s prefinal action. After getting spun in turn two on the opening lap then falling all the way back to the rear of the field, Gonzalez fought his way back to 15th and that’s where he would start the final. After only six laps into the final, Tyler fought his way to the lead but decided wisely to just sit back and push a fellow driver away from the pack. On lap fifteen, Gonzalez took the lead, and went on to win the race! Unfortunately, a post-race protest filed by another competitor would result in a five position penalty and a sixth place finish. 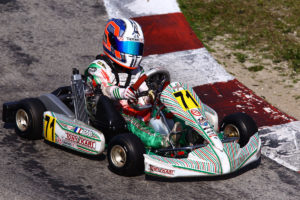 Alex Powell and Paul Bocuse were both ready to earn great results this time around in the Micro MAX class. Powell set the tone for the weekend by setting the fast lap in qualifying, putting the SCR Tony Kart on the pole for the heat races. He faced an unfortunate DNS in heat one, but came back to earn two second place finishes in the remaining heats. He would finish fourth in the prefinal on Sunday, and third in the final after a great last corner pass to bring home another podium finish for Speed Concepts Racing. Bocuse posted a fifth place qualifying effort, showing early on his vast improvement from the previous weekend. He ran in the top-ten throughout the heats, and earned a ninth place finish in the prefinal before improving to seventh in the weekend’s main event. Simpson, running in the Rotax Mini MAX class, impressed all in qualifying with a fourth place result. Going fourth, fourth and fifth in the heat races, Simpson had a podium result in his sights in the main event before contact sent him down the running order to garner an eighth place result when the checkered flag flew.

“I am very impressed with our results in Palm Beach,” said team owner Mike Speed. “We were able to secure the win in ROK Junior, courtesy of Tyler, and a third with Alex in Micro MAX. Paul and Kyffin drove great both weekends as well, consistently improving every session. We encountered some bad luck at times, but all four of our drivers came back from it, their driving skills really shining through. We are looking forward to the rest of the season and the continued success that comes along with it.”

The team’s next stop is at round one of the SuperKarts! USA (SKUSA) Pro Tour at NOLA Motorsports Park, March 3-5. For more information please contact Mike Speed at speedconceptsracing@gmail.com.