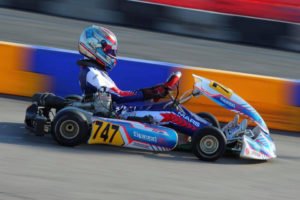 Capping off their 2019 season, Speed Concepts Racing travelled to the RIO All-Suite Hotel and Casino for the annual Superkarts! USA (SKUSA) SuperNationals. Taking on the temporary circuit, the Florida based Tony Kart program claimed three top-ten results along with a heat race win and a front row starting spot on Super Sunday.

“The results were not indicative of our true pace,” explained Mike Speed. “The heat races went well, and we had a lot of drivers in the top-ten. Unfortunately, luck was not on our side on occasion and some incidents put us further down the running order than our drivers should have been for the main events. Congrats to Luca, Luke and Scott on their top-ten finishes.”

Two Speed Concepts Racing drivers ran at the front of the field on Super Sunday as Luca Mars and Luke Lange finished sixth and seventh respectively. Mars was able to rebound from an 11th place starting position and drive forward to narrowly miss a top-five result. Finishing fifth on track, Mars was dropped to the sixth position after a post-race bumper penalty added five second to his overall race time. Engaged in a mid-race battle to get around some of his X30 Junior counterparts, Mars lost touch with the leaders and was unable to close the gap before the checkered flag flew. Lange, courtesy of some impressive heat race results which included a win, started on the front row on Super Sunday and was a victim of the outside P2 starting position. With the first two corners left handers, Lange was unable to get his Tony Kart to the inside to defend the position and immediately fell back to fifth. Working hard to maintain his position, Lange crossed the line in the seventh position putting two Speed Concepts Racing drivers in the top-ten. 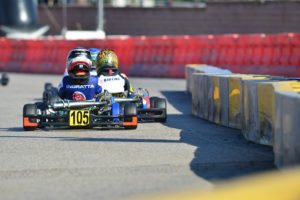 Scott Roberts advanced forward fourteen positions in the X30 Masters main event to narrowly miss a top-five result coming home in sixth. Rocketing his way through the field and into the top-ten from his 20th place starting spot, Roberts brought the Speed Concepts Racing colors into the top-ten to score the team’s third top-ten result of the weekend.

Ayden Ingratta progressed through the heat race flight format nicely claiming some solid finishes including ninth and 12th place results. Looking for a top-ten finish on Super Sunday, Ingratta was running inside in the fifth position before contact ruined his day and relegated him down the running order.

Speed continued, “While the weekend did not go as planned for Paul Bocuse, Jace Park and Jack Jeffers, the trio of Junior rookie drivers gained experience and will return to the 2020 edition of the event better, faster and stronger. Committed to performance, the duo is prepared to rebound in their 2020 campaigns.” 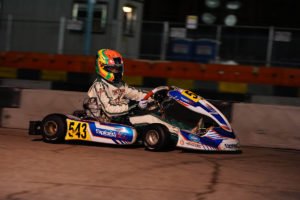 Speed Concepts Racing would like to thank Chris Freckelton and Precision Racing Works Engines, and Daniel Woltjer and Woltjer Racing Engines for the help, support and power this weekend in Las Vegas.