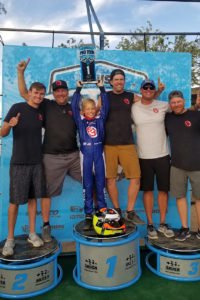 In what could only be described as a miserable weekend weather wise, Florida based Speed Concepts Racing traveled west this past weekend to compete in the Superkarts! USA (SKUSA) SpringNationals. With temperatures north of 100F and a dust storm that was like no other, Speed Concepts branded drivers prevailed to claim one main event victory, three podium results and several strong runs amongst their six driver program.

“What a weekend in Phoenix,” expressed Mike Speed. “The weather was brutally hot and it was a tough week for our crew and drivers. We overcame temperatures of more than 100 degrees for three straight days as well as a nasty dust devil that tore up the paddock. At the end of the weekend, we left Phoenix with a victory, three podiums, one pole position and one prefinal win.”

All three Speed Concepts Racing IAME Mini Swift drivers claimed top-ten finishes on Saturday with Noah Baker securing his first SKUSA podium. After qualifying fifth and finishing third in the prefinal, Baker maintained his position in the main event to put SCR on the third step of the podium. Alex Powell improved on his morning qualifying effort of ninth to finish fourth in the main event, putting two Speed Concepts Racing drivers in the top-five. Paul Bocuse impressed in qualifying with his third place effort, but a 25th result in the prefinal eliminated a chance for the victory. Driving like a seasoned veteran in the main event, Bocuse gained the most positions of any driver on track advancing from 25th to eighth and would shift his focus to Sunday.

The three Mini Swift drivers would once again show speed in Sunday’s qualifying session with Saturday podium winner Noah Baker leading the field and claiming the pole position. Alex Powell and Paul Bocuse put all three Speed Concepts Racing drivers in the top-ten. Powell and Baker maintained their top-five positions in the prefinal as the duo claimed third and fourth place results. Bocuse was involved in an on track scuffle that sent him down the running order before he was eventually classified in the 17th position.

In a thrilling main event, Baker began the final circuit in fourth as he was at the tail end of the lead quartet and in the fight for the win. Moving from fourth to the point, Baker crossed the line as the leader and secured a Mini Swift victory for Speed Concepts Racing and his second podium result of the weekend. Alex Powell ended his weekend in 23rd after crossing the line 13th before a post race penalty while Paul Bocuse retired early due to illness.

Tyler Gonzalez put Speed Concepts on the front row of the X30 Junior field as his second place qualifying effort vaulted him into a prefinal victory. Taking the lead early and maintaining the top spot for several laps, Gonzalez lost the lead but managed to secure the second step on the podium. Sunday saw Gonzalez qualify in the top-ten before ending his main event with results that did not reflect his true speed. Canadian Justin Arseneau garnered a tenth place finish in the main event after hovering inside the top-ten throughout Saturday’s wheel-to-wheel competition. Qualifying eleventh and finishing ninth in the prefinal, the Canadian champion added a tenth place finish to his resume. Sunday, Arseneau turned his 28th place qualifying effort into a 17th place finish in the prefinal and moved forward again in the main event to finish fifteenth, but only after he was forced off the track and back to 34th on lap two.

Speed Concepts Racing newcomer Luke Lange worked hard throughout the weekend and continually improved in his debut weekend with the team. Showing pace in Friday’s test sessions, Lange ended his Saturday’s competition with a 23rd place finish. Sunday saw Lange improve his qualifying pace as he ended the session 22nd but would fall one position in the prefinal to claim P23.