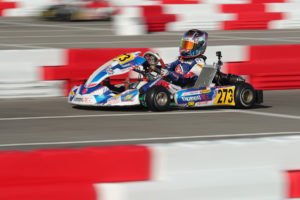 Another weekend and another win for Speed Concepts Racing as the Orlando, Florida based outfit dominated the junior ranks in the month of January. Scoring a pair of victories at the Superkarts! USA Winter Series with drivers Luke Lange and Justin Arseneau, it was Luca Mars’ turn to lead the junior contingent as he added another win to both the Speed Concepts Racing and his personal results resume at the temporary circuit adjacent to Hard Rock Stadium, home of the Miami Dolphins.

“We ended another strong weekend with one main event victory, two pole positions, two podium results, and three heat race wins,” added Mike Speed, Owner of Speed Concepts Racing. “Our Junior program continues to flourish and we have successfully opened 2019 with three victories in three events. A huge thank you to SwedeTech Racing Engines, Woltjer Racing Engines and Precision Works Racing Engines for all of their hard work, support and belief in our program.”

Leading the way during the opening round of the ROK Cup Promotions Florida Winter Tour was junior standout and Tony Kart driver Luca Mars. Claiming the pole position on Friday afternoon, Mars went on to finish third, second and first in his heat races and looked to be the driver to beat heading into Sunday. With heavy rain moving through the Miami Gardens, Florida area and prefinals canceled, drivers had one chance for wheel-to-wheel action on Sunday and Mars took full advantage by taking the checkered flag, his first main event win of the season.

Canadian Justin Arseneau stood on the podium with Mars as he put his Speed Concepts Racing Tony Kart in the third position. After qualifying 11th and having a pair of top-six results in three heat races, Arseneau rose to the occasion on Sunday as advanced forward from his top-ten starting position to garner the third step of the podium in a talent-filled ROK Junior division. 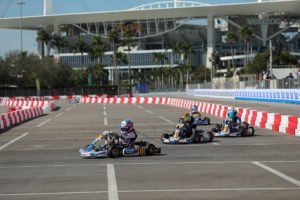 Kyffin Simpson would pull double duty on the weekend competing in both the ROK Junior and 100cc Junior classes. Qualifying fifth and finishing eighth in heat one were the highlights of Kyffin’s ROK Junior weekend while his 100cc Junior Speed Concepts Racing prepared Tony Kart scored the pole position and two heat race wins in the 100cc Junior class.

Paul Bocuse had a stout weekend in the Vortex Mini ROK class as a second place effort in qualifying were backed up with fifth, fourth and third place results in the heat races. Starting the main event inside row three, the final on-track action of the weekend would not be favorable for Bocuse as he dropped back to just outside the top-ten. Ayden Ingratta continued his Mini ROK development and gained even more experience and coaching within the Speed Concepts Racing program.

“All of our drivers drove exceptionally well throughout the weekend,” added Alex Speed, Speed Concepts Racing Driver Coach. “We had some high points on the weekend and some low ones as well, but that is what happens in motorsports. A huge shout out to all of our Junior drivers for their much-deserved success, as well as to our Mini program and drivers who consistently improve with each passing event.”