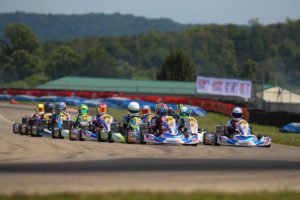 With the 2019 United States Pro Kart Series coming to a close two weeks ago and the Rotax Stars and Stripes in action this past weekend, Speed Concepts Racing ended two weekends of competition on a high note claiming multiple victories, podiums and pole position awards. With different drivers competing at both events, the Florida based Tony Kart program took top honors in four different divisions showing their true speed across multiple classes and engine platforms.

“Congrats to our three winners at USPKS at New Castle two weeks ago as well as all of our drivers on a superb performance at the Pittsburgh International Race Complex this past weekend,” explained Mike Speed. “Luca Mars and Kyffin Simpson took the checkers in the junior classes while Scott Roberts won Masters in Indiana. Luca was back on top in Pittsburgh as Paul Bocuse had a break out pair of events and capped it off with a Rotax Junior podium. Truly a solid performance by him and shows that hard work pays off. It was the start of a busy three weeks of racing for us in the Midwest but always good to get wins and podiums.”

In USPKS action on Saturday, four Speed Concepts Racing drivers ended the X30 Junior final in the top-ten led by Mars, who turned his second place qualifying effort into a win. With four in the top-ten, three would find their way to the top-five as Jace Park advanced forward to finish fourth from 16th while Paul Bocuse had a great day finishing fifth and constantly battled at the front of the field. Kyffin Simpson came home tenth on Saturday in X30 Junior while Jack Jeffers gained ten positions from Saturday morning’s qualifying to the final checkered flag that day.

Bocuse garnered the team’s best X30 Junior result on Sunday marching his way from a top-ten qualifying effort to a fifth place finish by the time the final checkered flag flew, while Mars put two Speed Concepts Racing drivers in the top-ten. Jack Jeffers claimed his best result since moving to the program less than a few weeks ago with a 12th place finish. Kyffin Simpson showed speed Sunday morning taking the X30 Junior pole position but he and Jace Park would have no luck in the day’s main event. Simpson pulled double duty and was one of the dominant drivers in KA100 Junior all weekend long. After claiming the second step of the podium on Saturday, he returned to the track Sunday to top the blocks. Overcoming an eighth place qualifying run, Simpson drove through the field to take the checkers and finish the 2019 USPKS KA100 Junior season on top. 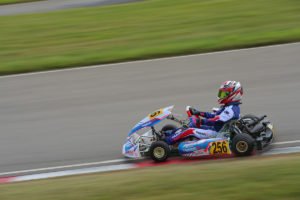 Qualifying outside the top-twenty on both Saturday and Sunday, Ayden Ingratta moved forward when wheel-to-wheel action commenced. Gaining ten positions on Saturday to finish ninth and another nine on Sunday, the young Canadian driver added a pair of top fifteen-results at one of North America’s fastest karting facilities.

With no time off, the team travelled to the Pittsburgh International Race Complex for the Rotax Stars and Stripes event and once again performed flawlessly. Mars scored the race win in Rotax Junior as Paul Bocuse joined him on the podium in P3. Mars narrowly missed sweeping the weekend by missing out on the pole position to teammate Kyffin Simpson, but went on to take three heat race wins, prefinal win and main event victory. Bocuse had a career weekend in Junior, battling with some of the nation’s best at the front of the field. Four Speed Concepts Racing drivers finished in the top-six as Jack Jeffers narrowly missed the podium in fourth and pole sitter Kyffin Simpson, who had a strong set of heat race results, crossed the line in sixth.

Speed added, “What can I say about our Junior drivers. They were on it this weekend, and Luca proved why he could be classified as the top junior competitor in the country. Kyffin had two solid weekends of action while Paul really stepped up to the plate and showed the he is a contender. Jack has quickly grown within the team and his results are speaking for themselves as of late.”

Packing up Sunday and driving back to Indiana, Speed Concepts Racing will enter seven at this coming weekend’s Superkarts! USA (SKUSA) Pro Tour finale. Five drivers will enter the X30 Junior division as Mars, Bocuse, Jeffers and Simpson will be joined by Jace Park and Luke Lange, who had a strong run at the New Castle Motorsports Park facility in 2018. Ayden Ingratta will be the lone SCR branded driver in Mini Swift as he aims to continue his forward progress.