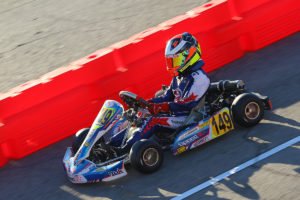 Participating in the first annual ROK Cup USA ROK the RIO event, Speed Concepts Racing made the long, cross-country trek to Las Vegas. Taking place in the parking lot next to the RIO All-Suites Hotel and Casino, the Florida based team showed great pace and results through the heat races and looked to be in contention come Championship Saturday. When the final checkered flag had flown, the elite level operation scored one pole position, three heat race wins, and a top-five finish.

“It was a difficult weekend for us results wise, but we had good pace and improved on some issues that we had earlier in the week,” explained Mike Speed. “The competition was tough and the entire event was great but it was not our weekend. We will regroup and focus on the next one.”

Three drivers competed in the Vortex Mini ROK class as Noah Baker, Paul Bocuse and Ayden Ingratta would do battle in the 34-kart strong field. Baker scored the best performances on the weekend that included top-five results in heat races including a heat race win, but could only manage an eighth-place finish at the end of the main event. Bocuse, who struggled slightly throughout the event week, looked to have his problems sorted out in heat four as he rocketed into the top-ten. Starting the final in a position where he could challenge for a podium result, it was all for not as a first lap incident relegated him down the running order.

Ayden Ingratta made the long trip from Canada to make his Speed Concepts Racing debut as he joined the elite level program. Constantly improving through the highly touted SCR driver coaching efforts, Ingratta improved in many of the on-track sessions as he took the knowledge he learned in the pits and applied it on track. Unfortunately, Ingratta was collected in the main event first lap incident and was forced to retire.

“We are happy to be back with SwedeTech Racing Engines power in the junior ranks,” explained Speed. “We go way back in both business and personal relationships and it is good to be back part of the family. The customer service that Reine Persson and his staff provide are second to none and the power is always on point to win week in and week out.”

Qualifying on the pole position and winning the fourth heat in Vortex ROK Junior, Luca Mars started the main event on the outside of the front row but was unable to turn that start position into a victory. Battling at the front of the field for the main event, some tough racing and hard luck saw him fall down to just inside the top-five but still finish just off the podium in the fourth position.

After a disappointing result in the first heat race, Luke Lange improved his finishing result each and every heat race throughout the entire weekend. Ending heat four in the 14th position, a top-ten finish was in sight until the third corner on the opening lap. Involved in a multi-kart incident that he could not avoid, Lange was forced to restart his ride but eventually retired from the race.