The Energy Kart USA team brought home solid results in the final round of the Sofina Foods US Open series in Las Vegas, Nevada. With a potent line-up of 11 drivers, the Colorado-based team managed to secure podium appearances, several top-ten finishes and a championship title in the Shifter Senior category.

Shifter Senior driver Sabre Cook drove phenomenally all weekend, piloting her Energy Kart USA chassis to a second place finish in the final. After an impressive heat race win and several more solid finishes, Cook started the final from the outside of the front row. She jumped to an early lead, leading the field by two seconds for a large portion of the race. With a shot at the championship in sight, Cook continued to drive smart and brought her Energy Kart home with a second place finish. With this impressive finish, Cook found herself on the top step of the championship podium, bringing home the 2016 US Open Senior Shifter title.

In Shifter Masters, Energy Kart USA driver Hugh Templeman fought hard all weekend to achieve strong results. His efforts paid off, coming home with a solid sixth place finish in the final. He also secured third place in the championship standings for the series, a phenomenal accomplishment for his rookie season at the national level. Teammate Jet Davis brought home great results as well, finishing fifth in the final at his first national event for 2016.

Rotax Masters driver Allen Moore made his national debut this past weekend, showing improvements every session. Moore ended his weekend with an impressive sixth place finish, proving he will be strong competitor in 2017. 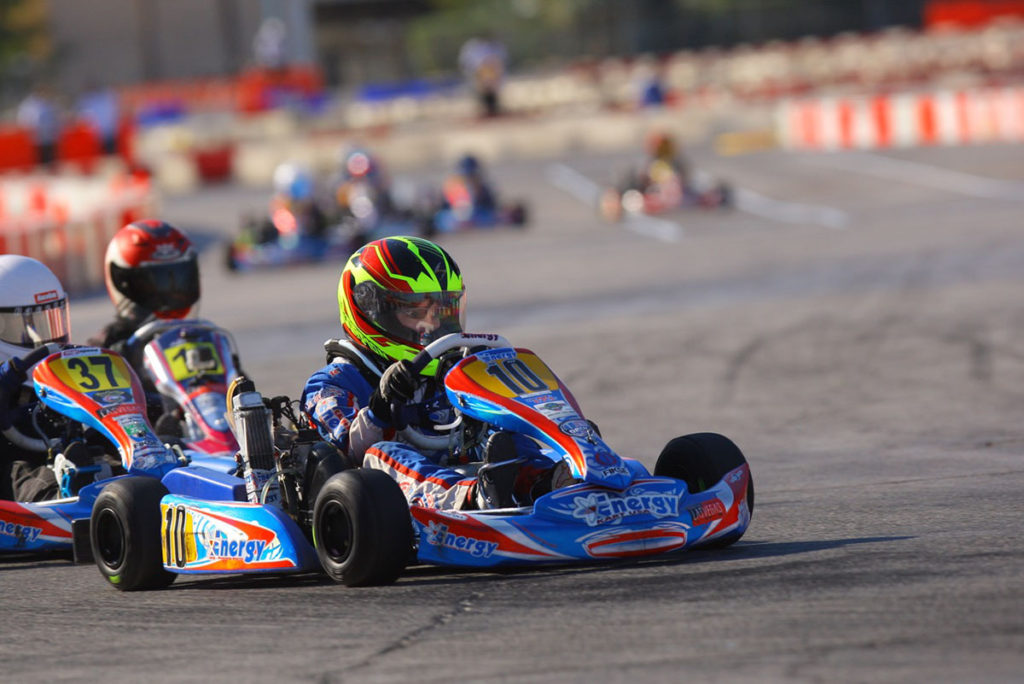 In Mini Max, Energy Kart USA pilot Seth Cothrun demonstrated strength and determination throughout the weekend in his national debut. Improving every session on track, he finished inside the top-15 in several of the heat races. Unfortunately, Cothrun encountered some bad luck in the final, resulting in a 21st place finish.

In Micro Max, Braden Hindson drove an incredible final race. After destroying a chassis in one of the heat races, Hindson regrouped himself and focused on the final, driving from 25th to 16th in his first Vegas race. Teammate Dax Cothrun showed impressive speed, peaking in the top-ten throughout the weekend. Unfortunately, Cothrun was involved in an incident on the opening laps of the final, damaging the chassis. He did not let this stop him and continued to drive hard for the remainder of the race, finishing 21st in his first national event. Kabis Jacobs also put on a great performance, moving up the running order each session. In the final, Jacobs stayed out of trouble and drove a smart race, finishing inside the top-20.

Energy Kart USA would like to thank all of their partners for their continued support. A special thank you to Grand Junction Motor Speedway, WR International, Viceroy Resorts, SwedeTech Racing Engines, Energy Freedom Project, AIM Sportsystems and New-Line Radiators.

Energy Kart USA now shifts their focus to their final event of the year, the SuperKarts! USA SuperNationals in Las Vegas, Nevada. The team will be working hard to achieve even better results than they did this past weekend at the US Open of Las Vegas.

For more information on Energy Kart USA please contact them at 970-250-4663 or via email to Stacey@EnergyKartUSA.com.