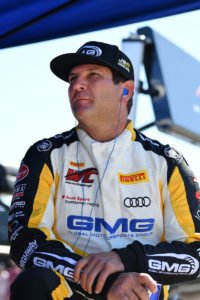 Traveling to the Portland International Raceway in Portland, Oregon, Jason Bell entered the event with a brand new Audi R8 GT4 LMS under the Global Motorsports Group (GMG) Racing banner. Replacing a destroyed car from the last Pirelli World Challenge (PWC) event weekend at Road America, Bell was immediately on pace and was inside the top-ten in class throughout the event weekend, adding ninth and sixth place results to his 2018 campaign.

“Overall I am happy with the way our weekend went,” stated Bell. “Following Road America, everyone at GMG did a tremendous job getting our new car turned around and ready to race, so to run a relatively flawless weekend was all we could have asked for but we did more then that, we really had a strong outing. Overall I’m happy with the performance starting 26th overall and driving to 11th overall until two laps to go in race one when a small mistake cost me three positions. I am looking forward to the final few weekends of the season.”

After finishing the two practice sessions in eighth and ninth respectively, Bell turned it up in qualifying claiming the seventh fastest lap of the session. Race one would see the Floridian advance to the top-five before a mistake cost him several positions, crossing the line in P9.

Back to the track on Sunday for race two of the weekend, Bell once again marched his way forward. Advancing seven positions in the overall ranking, Bell ended his Portland weekend with a sixth place finish and will now shift his focus to the next event.

Bell continued, “All in all I was inside the top-ten in class the entire weekend. The results and speed are a true testament to the program that I am involved with, and I can’t thank everyone enough for their hard work and efforts over the past two weeks.”

Next up for Jason Bell is Tooele, Utah as the Pirelli World Challenge returns to competition August 10-12 at the Utah Motorsports Campus.