It was a career best result on Saturday for the Hattori Motorsports #016 entry of Seth Lucas and Matt Plumb. Taking on the VIRginia International Raceway (VIR), Lucas and his co-driver earned a season best finish in the Pirelli GT4 America program as they improved from their P8 starting position to end the day in fifth, the highlight of their race weekend before a disaster on Sunday. 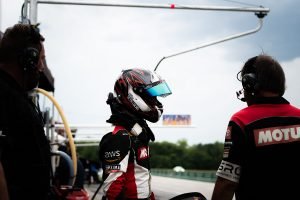 Progressing through a couple days of testing at the VIR facility, Friday would be the home for official practice before weather moved into the area. Topping the charts in class and overall, the Motul USA branded Toyota was fast right out from the trailer. Skipping most of the afternoon session due to weather, Lucas and Plumb would look forward to qualifying on Saturday morning.

With back-to-back qualifying sessions to set the grid for both Saturday and Sunday’s wheel-to-wheel racing, Lucas qualified eighth for Saturday while Plumb piloted the Toyota to an outside row six starting position for Sunday.

Lucas would take the green flag on Saturday afternoon as he started the race and maintained his position in the top-ten. Moving forward before the mandatory mid-race driver change, Seth handed the controls to Matt Plumb who would take the car to the checkered flag. Pushing hard until the end of the very final lap, Lucas and Plumb earned their best finish of the 2022 season.

“What a race and what a day,” explained Lucas. “We knew we had the speed to be at the front but had to overcome our P8 starting spot. I think I did a good job behind the wheel in the first half of the race and gave the car to Matt to finish strong. Super happy with the result, but we are fully focused on bettering today’s finish tomorrow.”

Sunday’s race would be short lived with Plumb starting but failing to complete the first lap. Involved in a two-car incident that brought the race to a halt under red flag conditions due to severe wall damage, the #016 Toyota was destroyed in the heavy impact but thankfully all drivers walked away from the incident.

Lucas continued, “The car is not repairable, but we have a month before we race again in this series, and we will be working hard to make sure we are more than ready. Next week I will be back on track in another brand of car at the Mid-Ohio Sports Car Course in the Trans-Am Series. Following that I will be at Road America on two separate dates for a test, including one in our new Toyota and another in an LMP3. I look forward to announcing more details soon.”

Following the race, Hattori Motorsports confirmed that a replacement car would be with the team midweek to ensure no slowdown in the test program and overall goal for the team and drivers.

For more information on Seth Lucas and Hattori Motorsports, please contact Chris Lucas via email to Clucas@TeamLucas.org or visit Seth Lucas online at www.SethLucasRacing.com or by searching him on social media via Seth Lucas Racing.