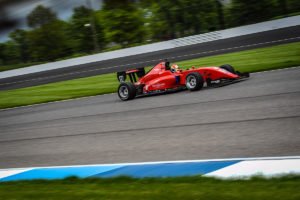 After an event-filled month of May in Indianapolis, Canadian Antonio Serravalle will be heading to Elkhart Lake, Wisconsin for rounds six and seven of the 2019 Indy Pro 2000 Presented by Cooper Tires Championship. With five races completed and eleven races remaining in the 2019 season, Serravalle is currently eleventh in the championship standings as he will look to score the results, and accompanying points this weekend to move up in the overall order.

“Last month did not end on a high-note for us,” Serravalle recounted. “We were showing a good pace with two top-ten finishes at Indianapolis Motor Speedway, but unfortunately mechanical issues took us out of the race early at Lucas Oil Raceway. Moving forward, we hope to continue gaining speed throughout the remainder of the season, and really gather the results that the crew deserve.”

This weekend, the Pserra Racing driver will be competing for his second time at the renowned Road America. The four-mile permanent road course will also be hosting the entire Road to Indy program as well as the NTT IndyCar series June 21-23.

“I am looking forward to being back at Road America,” Serravalle said. “Last year was my rookie season, and I feel that I have learned a lot throughout last year and the beginning of this season. I am confident that the Pserra Racing team and I can use this experience to begin seeing better results throughout the rest of the season, starting at Road America.”

Serravalle’s weekend will get underway first thing Friday morning with a practice session and qualifying for race one later that afternoon. Friday will end with an autograph session, where fans will have the chance to meet with Serravalle and pick up a signed hero card. Saturday will be another early start with a second round of qualifying in the morning and the first race of the weekend (round six) that afternoon. The weekend will come to a close on Sunday morning for round seven of the 2019 championship season.

All the racing action can be seen on the Road to Indy TV app or via the Indy Pro 2000 Presented by Cooper Tires Championship Facebook page. Be sure to also be following Serravalle on Facebook and Twitter for daily schedules, session updates and all of the latest news.