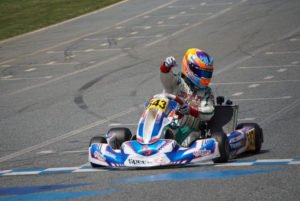 Leading the way for Speed Concepts Racing on the results sheet was X30 Masters driver Scott Roberts. After battling at the front of the field on Saturday and claiming a disappointing main event result due to contact from another driver, Sunday proved to be his day to celebrate. After qualifying third and finishing seventh in the prefinal, Roberts drove like a seasoned veteran in the main event, taking his Tony Kart to the top and scoring the big victory.

“A huge congrats to Scott,” explained Mike Speed. “It was a disappointing result on Saturday after running so strong but he returned Sunday and was on a mission. It is good to see him succeed as it brought a lot of our younger drivers to the fence to cheer him on.” 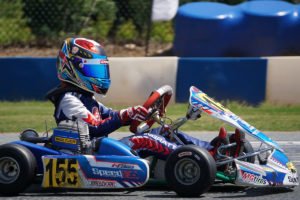 Junior driver Kyffin Simpson once again pulled double duty in USPKS competition with his best results coming from the X30 Junior class. After qualifying fifth on Saturday, Simpson drove to the front of the field in the prefinal to take the win. Looking to maintain his position in the main event, a hard fought battle ensued with Simpson falling back to second and claiming the second step on the podium. Returning Sunday, Simpson turned his 12th place qualifying effort into a fourth place result as he marched his way forward through the prefinal and main event. Also competing in the KA100 Junior class, Simpson showed speed and promise battling near the front of the strong field and had to speed to win main events in both junior divisions, but was forced to drive forward often after early race contact.

Jace Park added a pair of top-ten results for Speed Concepts Racing after showing race winning pace. Finishing 17th in Saturday’s prefinal, Park sliced his way forward to finish eighth in the main event. Returning to the track on Sunday, the Junior rookie qualified on the inside of row two and maintained his position throughout the prefinal. When the dust had finally settled and the final checkered flag had flown, Park secured another top-ten finish, a seventh place result.

Improving throughout each day of competition, Junior rookie Paul Bocuse elevated his results in each and every on track session. Showing solid promise as a rookie in the field, Bocuse fell victim to the physical demands of both the facility and long main events. With his continued progress forward throughout each day, Bocuse and Speed Concepts Racing are taking the positives from the event as they look forward to the next on track action. 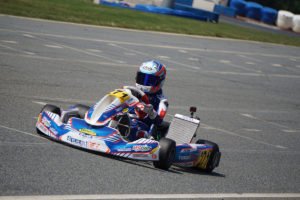 Speed added, “Paul drove exceptionally well. He is a small kid and strong for his size but the grip, hot weather and long laps took its toll on him. He will on point by the end of the year! We also had Luke Lange racing with us this weekend but after bruising ribs in an ATV crash he was in and suffering from a lot of pain, the decision was made to forgo the weekend. Luke is a tough driver, and we wish him a speedy recovery and will be ready for New Castle.”

Claiming wins north of the border in Canada, Ayden Ingratta’s results were not reflective of his true speed. Battling engine gremlins throughout the race weekend, Ingratta was unable to show his true potential at the ultra fast GoPro Motorplex.