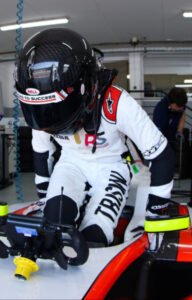 A front runner in North American karting, Miami, Florida’s Santiago Trisini is set to make his single seater debut. After exploring options across several continents, including the Road to Indy in North America, Trisini has chosen MP Motorsport and the Spanish Formula 4 Championship as his home for the 2021 season.

“I’m extremely excited to be racing with MP Motorsport in the Spanish F4 Championship,” said Trisini. “I am honored to race with such a high-caliber team and look forward to working with them. I’m confident that we will achieve our goals and then some more! I’m extremely thankful for the support of my sponsors, my parents, Road To Success and my manager Facu Regalia. Now bring on 2021.”

Trisini, who is guided by former GP2 and GP3 driver Facu Regalia, already tested F4 cars in 2020, and is eager to compete in his first races in the category. He will join Suleiman Zanfari, Rik Koen, Gil Molina, Dilano van ’t Hoff, Manuel Espírito Santo and Noah Degnbol Møller in a strong Spanish F4 line-up for the Dutch MP Motorsport team.

“It’s great news that Santi is coming over to Europe for his single-seater debut,” added Sander Dorsman, MP Motorsport’s team manager. “He has shown huge amounts of natural talent from the moment that he started in karts, and I’m sure he will adapt to the F4 car like a duck takes to water. Our F4 line-up is already one of the strongest yet, and with Santi it has become even better.”

Trisini had a stellar karting career in the US, becoming a United States ProKart vice-champion and reaching the podium of the Superkarts! USA (SKUSA) SuperNationals at Las Vegas. Meanwhile in Europe, the young American earned the vice-championship in the 2017 IAME X30 International Final at Le Mans. In 2018 and 2019, Trisini raced in WSK’s Euro Series and Super Master Series and the CIK-FIA European and World Championships, all at OK Junior level, before the COVID-19 pandemic put much of his planned 2020 program on hold.

Trisini added, “I would like to send an extra special thank you to Jay Howard and his Jay Howard Driver Development program for allowing me to test a USF2000 car back in the USA. Jay was a great coach, very supportive, and helped me improve a lot in a very short period of time and for that I will be grateful. If the opportunity to compete in the USA and the Road to Indy should come up, we will look at the options and see if it suits our program. Also, I want to say a big thank you to everyone who has helped me to date in my career. This is just the beginning for me.”