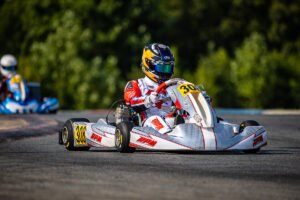 It has been a busy few months for Ryan Perry Motorsport (RPM), but it has been filled with race wins. Claiming victories at the United States Pro Kart Series (USPKS), IAME United States Grand Nationals, and Superkarts! USA (SKUSA) Pro Tour, Ryan Perry Motorsport has hit their stride as they enter the last quarter of the 2021 season and some of the nation’s largest events are on the horizon.

Taking on Road America for the USPKS event in July, Carson Morgan was able to sweep the weekend claiming a pair of main event victories in KA100 Junior and X30 Pro Junior. Following that winning weekend, RPM and Morgan headed south to the IAME USA Grand Nationals at the GoPro Motorplex in Mooresville, North Carolina and repeated his USPKS success. Winning both main events and topping the podium in KA100 Junior and X30 Junior, Morgan was able to add to Ryan Perry Motorsport’s win total and dominate the weekend.

“Carson was on a roll, and we all thought that there would be a challenge soon,” explained Ryan Perry. “He is an incredible talent and obviously can wheel a kart, so we just keep pushing as a team to keep the streak going.”

With the SKUSA Pro Tour next on the schedule, Morgan was once again the driver to beat. Adding more victories to his overall total, Morgan netted two more KA100 Junior wins along with two more trips to the top step of the podium in X30 Junior. Scoring eleven straight national level race wins dating back to Sunday’s main event at the SKUSA SpringNationals in Utah, Morgan will make the jump to the X30 Senior division at the SKUSA SuperNationals in Las Vegas later this year and should contend for the win

It has not been only Carson who has had success, Ryan Perry Motorsport’s newcomer Pauly Massimino was able to put together a podium performance in his first event with the California based program. Claiming the X30 Pro Shootout victory at the IAME Grand Nationals, Pauly went on to finish second in the X30 Pro main event. During the SKUSA Pro Tour at New Castle Motorsports Park, Massimino was able to finish third on Saturday and backed that up with an impressive fifth place finish on Sunday. 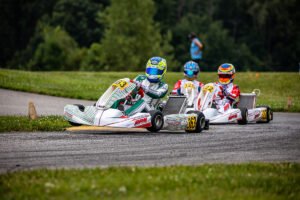 Perry continued, “Pauly has really come into his own with our team and since joining us he has been a podium victor in every event weekend he has entered under our program. That should show how evolved we are as a group and how well we work together as a team.”

Cole Morgan, older brother of Carson Morgan, earned his first Pro Tour National Championship this past weekend at New Castle Motorsports Park. Earning himself a top-five performance on Saturday in KA100, the elder Morgan also finished fourth in X30 Senior that same day to add to his podium result at the IAME Grand Nationals a week prior and top-five finish at Road America during the USPKS weekend.

Logan Toke and Parker Delong also put in strong performances for Ryan Perry Motorsport over the past few weeks. Toke ended the IAME US Grand Nationals with the fastest lap in the day’s main event but finishing positions have not been what he has deserved. Toke just missed the podium finishing in fourth at last week’s Pro Tour after leading some of the laps in the final. Delong was also on the podium at the GoPro Motorplex and Road America in the KA100 Junior class and ran near the pointy end of the field in SKUSA competition.

Perry added, “We have several big events on the horizon and have a few spaces under our team tent. Be sure to contact us today.”

For more information on Ryan Perry Motorsport, please contact Ryan Perry at 818.825.6944 or via e-mail to RyanPerryMotorsport@gmail.com.