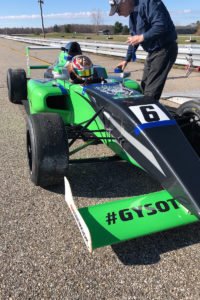 After competing in the Formula Pro USA Championship and completing several test days, Canadian rookie Ryan MacDermid is set to make his F4 United States Championship Powered by Honda series debut this weekend. Taking on the fast and flowing Road Atlanta, MacDermid will pilot the Gas Monkey Energy branded Alliance Racing #16 as he looks to start the season off right in Georgia.

“It has been a steep learning curve for me but I have had support from the team, engineer and driver coach since signing with Alliance Racing in late December,” explained MacDermid. “We were able to take part in some smaller events, experience both wet and dry weather racing as well as complete a few test days so I am excited to get started. I still have a lot to learn but will take the weekend in stride and see what we can do and where we can end up.”

Completing a recent test at Gingerman Raceway in Michigan, MacDermid had a big jump in performance and progressed nicely.

“Ryan was a little hesitant when he first got in the car in January but we have worked with him and he has made huge gains in performance,” added Nathan Toney, Alliance Racing Engineer. “He is nailing all of his starts, has consistent and accurate feedback and takes what he learns off track and applies it when in the seat. I was very happy with our most recent test where Ryan was on the limit and pushing for every tenth of a second.”

MacDermid is making the jump from karting to the open wheel formula car world with a colorful results resume. Scoring major race wins and strong performances both nationally and internationally, the young Toronto, Ontario resident is committed to begin his quest to climb the motorsports ladder and follow in the footsteps of fellow Canadian drivers.

MacDermid added, “I look up to the likes of Canadian drivers James Hinchcliffe and Robert Wickens and hope that one day, I can be where they are.” 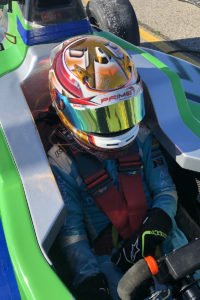 Competing alongside the F3 Americas, F1600 Championship Series and the F2000 Championship Series, Ryan MacDermid and his F4 entry will hit the track Wednesday for a Rookie and Promoters Test Session before two official practice sessions take place on Thursday. Friday morning will be the home of qualifying while the first wheel-to-wheel action on the weekend kicks off that afternoon. Rounds two and three of the F4 United States Championship Powered by Honda take the green Saturday. Visit F4USChampionship.com for live timing, results, photos, news and information from the event.

Ryan MacDermid would like to thank Gas Monkey Energy, Alliance Racing, K1 Racegear, and Lisa Fayle Real Estate for their continued support. For information on Ryan MacDermid, please visit him online via his social media channels by searching Ryan MacDermid Motorsports on Facebook, Instagram and Twitter.