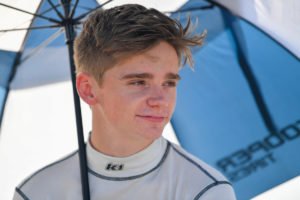 If Ryan MacDermid did not have any luck, he would have no luck at all. Making the switch to the Velocity Racing Development program for this past weekend’s F4 United States Championship Powered by Honda event at the Sebring International Raceway, the young Canadian’s weekend was bookended by solid results. Looking to continue his point scoring streak to five consecutive weekends in his rookie season, MacDermid needed to wait until Sunday’s third and final race of the weekend to complete that task.

“The weather played a big part in the results this weekend,” explained the Velocity Racing Development driver. “We had good pace in pre-event testing and qualified well, but race one and two did not go as planned. The third race of the weekend went well, and I was able to finish in the points. Big thanks to all the guys at VRD for making my new team feel like home, but also for working with me and never giving up.”

After qualifying in the tenth position, MacDermid fell back on the start of race one. With a never give up attitude and a will to succeed, the Canadian worked his way back up to the 11th position before eventually finishing in 12th.

On a damp but drying track for Saturday afternoon’s race two, MacDermid ran into issues with a late race spin while pushing for a top-ten finish.

“It was a mistake that I will learn from for sure,” added MacDermid. “I wanted to be aggressive and see if I could take advantage of some on track situations but just pushed a little to hard. I will make it up to the guys tomorrow.”

Returning to the track Sunday for the third and final wheel-to-wheel action of the weekend, MacDermid lined up on the outside of row five in the tenth position. Holding station for the first quarter of the race, the driver of the #66 machine took advantage of some mid-race caution periods to advance forward to finish in the seventh position and continue his point streak to a fifth consecutive weekend.

With six weeks off until the next on track action, MacDermid will anxiously await his first trip to the Circuit of the Americas. Competing alongside the Formula One World Championship in Austin, Texas, the goal to finish in the top-ten for all three races has been set while MacDermid will push hard for a podium result to end his rookie season.

Ryan MacDermid would like to thank Velocity Racing Development and Lisa Fayle Real Estate for their continued support. For information on Ryan MacDermid, please visit him online via his social media channels by searching Ryan MacDermid Motorsports on Facebook, Instagram and Twitter.