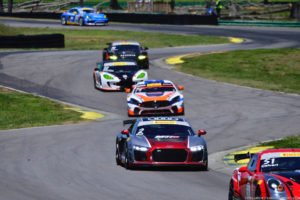 It was the third event weekend for the Pirelli World Challenge GTS division, and this time the series and competitors headed east to the rolling hills of the Virginia International Raceway (VIR). Taking on the tricky circuit, M1 GT Racing and Jason Bell entered their Audi R8 GT4 LMS in the PWC GTS division and had the pace for podium results but bad luck plagued them and any chance of great success.

“It was a difficult weekend results wise for us but there are a lot of positives that we can take from it moving forward,” explained M1 GT Racing Technical Director Remi Lanteigne. “We definitely had the speed for podium results, we worked well as a team, our trackside perception is second to none and we represented the M1 GT Racing and the Audi brand with the highest of standards.”

Saturday saw Jason Bell rocket his M1 GT Racing prepared Audi GT4 to a tenth place qualifying effort in the talent filled GTS division. Later that day, he proved his speed in the first wheel-to-wheel action of the weekend advancing forward numerous positions at the start of the race and before the mandatory pit stop, he would run in the fourth position.

Bell explained, “We completed our pit stop where we checked tire pressures and made sure that everything was in working order and returned to the track. Our pace was really positive and we were looking for at least a top-five, if not a podium result, before a flat tire pulled off the rim and forced me to retire. It was better that I stop the car on the back side of the circuit rather than risking more damage on the long lap back to the pits.” 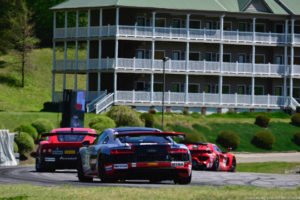 M1 GT Racing showed similar pace during race two on Sunday as Bell had once again worked his way forward from his starting position to place himself in the sixth position. During the mandatory pit stop, disaster would unfold as a pit lane time penalty would be enforced.

Lanteigne continued, “We were just a touch too fast and did not spend the required 75 seconds on pit lane. It is a heartbreak for all involved as we were challenging for another podium result today.

Jason Bell and M1 GT Racing will travel to Bowmanville, Ontario, Canada, just outside of Toronto for their next on track action. Taking place at the Canadian Tire Motorsports Park facility, the challenging layout and historic grounds will host the next rounds of the Pirelli World Challenge program.