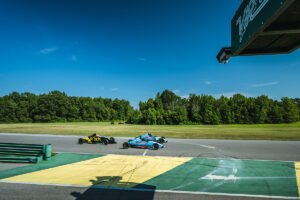 Flying under the radar of the national level motorsports programs throughout North America, Formula Race Promotions (FRP) has put together a four-part program about ‘Why Race with FRP?’ and ‘Recognize Us’. Often overseen by North American motorsports media and forced to promote from within to attract teams and drivers, the new four-part series will provide some extra information on why FRP should be the first part of the motorsports ladder for drivers looking to make auto racing a career.

Close finishes are no surprise in Formula Race Promotions (FRP) competition, especially in the true entry level class to open wheel motorsports, F1600. More often than not, a multi-driver bid for the lead on the last lap with positions exchanged happens at nearly each and every race weekend. It is rare that a driver will be able to break the draft and gap the rest of the field but more likely will be involved in a strategic chess match to put him or herself in the best position for the final drive to the checkered flag. We have gotten used to the need for photo verification and have a photographer at the finish line for every race. 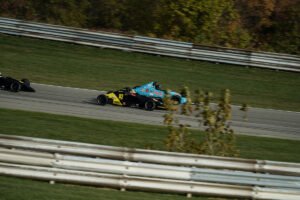 “The best component to the F1600 class and close racing is that we are truly training drivers for the future,” explained Robert Wright. “With lower horsepower, any loss of momentum could be catastrophic in the chess match for the win. Additionally, doing his or her part, a driver is able position their race car in a specific place on the track to take advantage of the big draft these cars create. It truly is a huge part of some of the great racing that FRP provides.”

“F1600 was and is still one of the greatest places for young drivers to learn their craft,” added multi-time IndyCar Series Champion and Indy 500 Winner Team Owner Chip Ganassi. “I started there along with a long list of the drivers who have risen to the level of successfully driving for me in IndyCar and IMSA. The close competition and historically deep fields with returning veterans battling the hard-charging up-and-comers creates some of the best racing in the world.”

“I started off my car career in F1600 in 2016,” explained now Andretti Autosport Indy Lights driver Kyle Kirkwood. “I couldn’t have asked for a better car or championship for me to learn the essential tools as a driver that I still use to this day.” 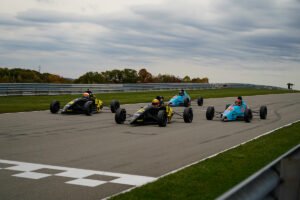 “As a driver, I always want to expand my lead early in the race and try and break away from the field,” added 2020 F1600 Champion Simon Sikes. “But some of my most enjoyable moments were the last laps of races when there were two, three or four cars in position for the win. I have been on the good side of many and the bad side of a few, but in all of them, I learned and that will make me a better driver in the future.”

“This year’s choice to compete in the FRP F1600 series was one that was really quite easy,” added Team Pelfrey driver and 2021 entrant Nicholas d’Orlando. “The amount of seat time and race experience is far beyond that of any other series and will be an amazing start to my career. The F1600 series is perfect for helping me learn close racing at an introductory cost.”

“We have found that good experienced karters and club racers can get in our cars and get up to speed in several sessions,” added Rice Race Prep’s Greg Rice. “What takes the time is learning to race in a pack of five to ten lead cars and to come out at the front of that pack more often than the others. Some drivers figure that out in a few events, some several seasons, and some never figure it out. Those lessons of learning to win transfer into the higher forms of motorsport. That is a big reason why we focus more on racing than testing. It is also a lot more fun for everyone involved!”

With FRP opening up the F1600 class to 14-year-olds, many of today’s best racers and tomorrow’s future stars are able to race on premier circuits before they can even drive on the streets. Additionally, the FRP program offers an F1600 Masters class that proves to be the stable ground for veteran racers. With the close racing and equality of the F1600 program, many of the elder drivers are able to run with, compete and even outpace some of their younger rivals.

“It is amazing to watch much of the paddock empty when the F1600 field is in the late stages of any of their three races on a weekend,” added Wright. “Usually, a drag race to the line, everyone wants to get a glimpse of the action and see who actually takes the win and by how much.” 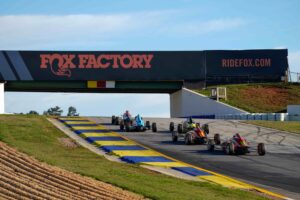 Stay tuned for next week’s part four, and final, of ‘Recognize Us’.

Please remember that all series news, information, results, photos, and PR will be communicated through our social media pages listed below. Be sure to tag FRP in any and all posts to help us have the ability to promote you.

For more information on any of the Formula Race Promotions promoted series, please visit www.FormulaRacePromotions.com. For questions, comments or concerns, please feel free to reach out to Bob Wright RobertW@RaceFRP.com or Clay Hutchison ClayH@RaceFRP.com. For media inquiries, please contact us via email at Media@RaceFRP.com.