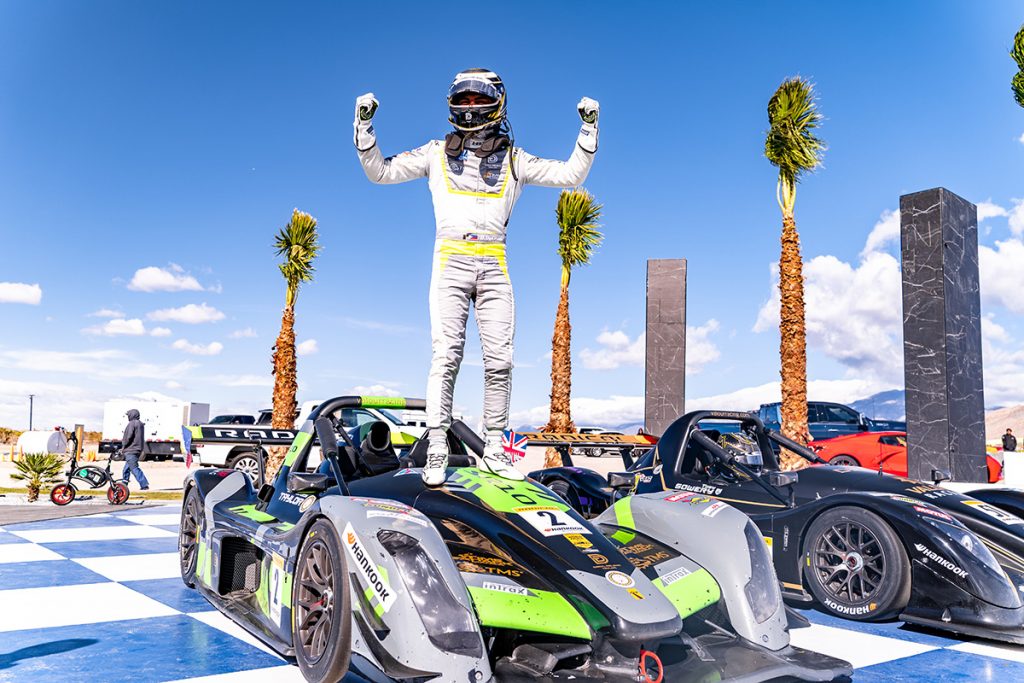 With practice, qualifying, and heat races taking place on Wednesday through Saturday, Sunday greeted Radical World Finals Presented by Hankook teams and competitors a totally different experience than they had been part of in the days’ prior. Other than being slightly cooler in temperature it was almost perfect conditions during qualifying and the heat races, but Sunday saw high winds and a lot of dust that proved to be difficult for some. In the end, it was all to play for in one on-track session to crown World Finals winners as Daryl DeLeon, Gregg Gorski, and Michai Stephens began their final wheel-to-wheel session from the pole position in Platinum, Pro 1500, and the Pro 1340 classes but in the end, it was the UK SR1 Champion, an Indy Lights Star and a member of the Lamborghini Young Drivers program who walked away with World Finals titles. 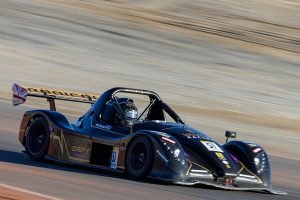 With wind gusts between thirty and forty miles an hour when the green flag flew, several drivers would go off course in the opening couple of laps, but the caution flag remained put away until lap seven for an incident. After slowing for two laps behind the safety car, it was another four laps at full speed before the field was slowed once again, this time for three circuits. With time winding down, it was a two-lap shootout to the end for the win.

In the Platinum class, the expected shootout between Radical UK Champion Daryl DeLeon (Valour Racing) and Indy Al Miller (ONE Motorsport) failed to materialize early on as an off-course excursion by Miller relegated him down the running order. Rebounding in the end, it was DeLeon who was able to drive to the Platinum class victory, a win that cemented his dream season. Miller clawed his way back through the field to finish second, 4.257 adrift of DeLeon with former American Le Mans Series Champ Jon Field (ONE Motorsport) completing the podium in third. It was an amazing drive for Miller to get back ahead of Jon Field late in the race after two trips off the tarmac put him behind what could have been an eventual race win. With the top-three drivers finishing within 5.7 seconds of one another, the pressure was high in difficult conditions. Scott Wagner (ESSES Racing) completed his World Finals weekend in fourth, missing the podium by one position as he finished ahead of the fifth-place runner of Judd Miller (ESSES Racing).

Indy Lights star and 2019 Portland Grand Prix race winner Toby Sowery (Valour Racing) was the dominant driver in the Pro 1500 ranks and carried that domination through Championship Sunday. Scoring the fastest race lap by nearly half a second, Sowery topped the podium blocks in a weekend that featured a pole position, two of three heat race wins, and the main event victory. Danny Dyszelski (WISKO Racing) rebounded from a power issue in one of the heat races to find his place on the second step of the podium, while Championship Sunday’s main event pole sitter Gregg Gorski (ONE Motorsport) crossed the stripe in third. Gorski, consistent all weekend, was unable to hold the younger drivers at bay but was happy with his front-of-the-field presence all weekend long. Former 2021 Pro 1500 North American Champion Gustavo Rafols looked poised for a podium position as he battled with Dyszelski for second before an off-track experience ruined his chances of a top-three result. Nick Groat (Spring Mountain) improved throughout the weekend and took advantage of some other driver’s misfortunes in the main event to secure a top-five result in the fourth position while Tanner Harvey (Spring Mountain) ended his Radical World Finals Presented by Hankook in fifth. 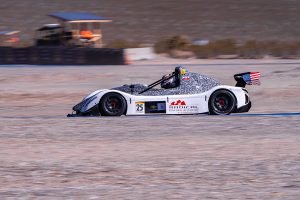 It was Michai Stephens (Team Stradale) who led the Pro 1340 field to the green flag from the inside of the front row courtesy of his heat two and three wins but in the end, it was hometown hero Patrick Liddy (Spring Mountain) who found his name at the top of the results sheets. Finishing eighth overall but first in class, Liddy was able to overtake Stephens late in the race to earn the World Finals victory. Stephens held on to the second position on route to the fastest lap of the race in the Pro 1340 ranks as he finished just half a second ahead of Jonathan Woolridge (Radical Canada East) in third. Woolridge was on a steady rise all weekend long and continually improved with each passing on-track session, saving his best result of the event for the finals. Chris McMurry (CROWN Concepts) crossed the line in fourth earning a top-five result for Crown Concepts while Jason Plotke (CROWN Concepts) put a pair of Crown Racing drivers in the top-five finishing fifth.

With the first Radical World Finals Presented by Hankook now in the record books, Radical Motorsport officials are already in the planning stages of the 2023 edition of the event. Stay tuned.