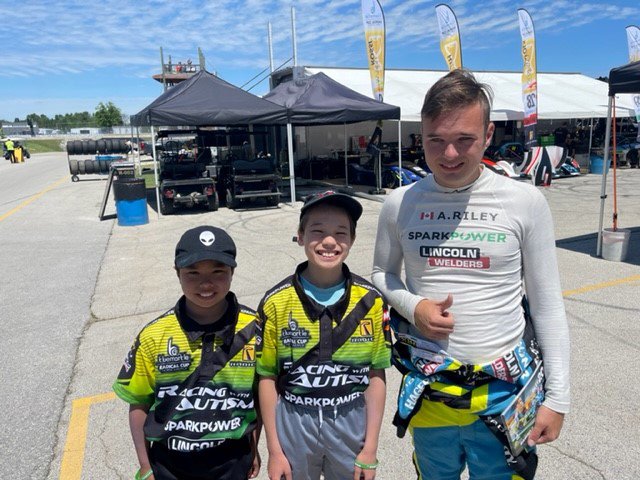 A Canadian Radical Cup Champion in 2021 and a Radical Cup North America multi-time race winner in 2022, Racing with Autism driver Austin Riley has inked a new partnership deal with Nesco Appliances. Funding his full race program through the help of his partners, Riley is thankful of his new supporter and can’t wait to celebrate with them on the top step of the podium.

“I am extremely pleased to announce that Nesco Appliances has come on board as a support sponsor for the Utah Motorsports Campus round of the 2022 Blue Marble Radical Cup North America season,” explained Austin Riley. “Normally, my dad is out pounding the pavement trying to find the means to pay for the next race, but this deal came a little different than most.”

It was formed by Austin just being Austin.

Riley added, “The COO of Nesco, Ross Niemi, was walking through the paddock at Road America in June with his two young boys as we were preparing for the first race of the weekend. I love to interact with people at the track and despite our engine struggles on the previous day, I was happy to try and put a smile on the face of young race fans.”

“My boys and I fell in love with the Radical cars,” explained Ross Niemi, the Executive Vice President and Chief Operating Officer of The Metal Ware Corp and Nesco Appliances. “This year at Road America, the only driver that was signing autographs before the race was Austin. He greeted us and took us over to his car and was the only driver at the track that was connecting with kids.  My boys got a chance to sit in Austin’s car and spend some time with him before the race. They now have Racing with Autism shirts and wear them often. We are excited to be a part of Austin’s journey.”

Riley added, “We are incredibly grateful to have Nesco onboard, and we look forward to representing their company proudly at the next round of the Blue Marble Radical Cup in Utah in two weeks’ time.”

For more information on Nesco Appliances, please visit them at www.Nesco.com. NESCO is the leader in home food preservation. They offer a full line of dehydrators and vacuum sealers as well as accessories. One of their most popular items in the NESCO Smart Canner.

Racing With Autism and Austin Riley would like to thank their partners and supporters for the 2022 season. A huge thank you to Spark Power Corp., Lincoln Electric, Hagerty, Ady’s Army, The Hawthorne Foundation, Hammond Manufacturing, Cal Chip Connected, Forest Contractors, Utech Electronics, ATC Coral, OPMT Racing, Nesco Appliances as well as all family, friends, and supporters.