The first race of the year for the Texas Sprint Racing Series was held on April 2 – 3 at Hill Country Kart Club in New Braunfels, Texas. Located in the heart of Texas, the facility encompasses an all concrete track that has a very challenging layout and with just over sixty racers entered in both two-stroke and four-stroke classes, the competition was fierce as teams and drivers looked to start the season off right.

Briggs Stock – World Formula – Trailer Alarms
The World Formula class sponsored by Trailer Alarms provided the best show of the weekend with close battles and multiple passes for the lead in the heat races and main event. Every time this class took to the track the fence was lined up with Spectators. Local Driver Shawn Ross drove the race of a lifetime to hold off Ribtect and Rpm RaceKarts supported driver Robby Mott for the main event victory.

During the race and with only a few laps to go, Robby Mott was able to pass Shawn Ross for the lead, but in doing so he forced Ross into the grass. Ross saved the kart and Robby let him take the lead back a few seconds later to ensure he would not be assessed a penalty post event. Mott’s statement after the race was that he did not want to win by forcing someone off the track to do so. Afterwards Ross was able to fend off Mott’s continued attacks and hold on for the victory. Rpm RaceKarts Driver Garrett Ramirez and Patrick Roth put on another great show fighting for the third step on the podium. The drivers made multiple passes on each other during the race with Ramirez coming out on top. BJ Hodge – (TB Karts Texas) finished fifth. Notables for this class included Rpm RaceKarts Driver and the #1 plate holder for TSRS in World Formula – Jerry Rhodes. Rhodes Qualified second and battled hard during the heat races and was able to lead on a few occasions during the weekend. Rhodes retired after Heat two due to a broken Frame. Jon Michel Gaston also ran well during the weekend, but retired early, also due to a broken frame.

Briggs LO206 Senior – TB Karts Texas / Heavy – Waco Trailers.com
The LO206 Senior / Heavy Class sponsored by TB Karts Texas had very tough competition during the entire weekend with both home town and out of town racers fighting for the top positions. The TB Karts Texas LO206 Light Qualifying was tight with Nathan Wilkins taking the top spot, Barry Peel (Alpha Karts USA) turned the second fastest lap during the qualifying session with Robert Schneider in P3. The heat races were fast and furious with Local Tommy Muth (Texas Karts), Landon Bednarz and Robert Schneider remaining consistent throughout the heats. The final provided a heated battle by Muth and Bednarz for first with Bednarz coming out on top. Peel was able to fight his way up from fifth to third with Schneider a close fourth. 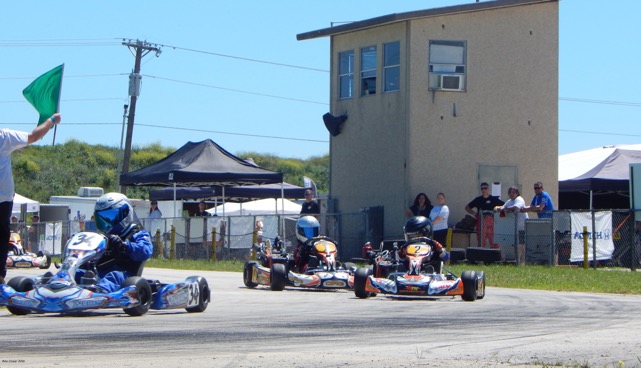 The Waco Trailers.com LO206 Heavy Class saw Local driver Paul Gonzalez pull off the win in with Chris Crosley second and Marvin Lee third. Overall the racing in the LO206 class is amazing and truly the most affordable kart racing class in the country thanks to Briggs & Stratton.

Briggs LO206 Cadet – LiMi Makeup
The LO206 Cadet class sponsored by LiMi Makeup provided great driving by Young drivers both new to the class and to the sport. Twelve-year-old new comer Jett Morton drove hard to take the pole poition, heat race wins and main event victory to sweep the weekend’s action. His closest competitor was 8-year-old Rpm RaceKarts driver – Jerry (Bubbie) Rhodes. The little man drove hard all weekend and was able to hold off his competitor and fellow racing buddy – Hugo Bonjour in third and Rebecca Bonjour in fourth to claim the second step on the podium.

Tag Cadet by Sponsored by Texas Karts
The Texas Karts Tag Cadet class was very busy with lots of great racing all weekend by these young drivers. The future of the sport had a tough time with their starts early in the weekend but after a drivers meeting with TSRS officials, the drivers were able to calm down and start the races without incident. Caiden Mitchell was able to pull off the win in the main event on Sunday followed closely by Ayrton Hernandez and Alex Stanfield to round out the podium. Travis Wiley was up front all weekend until a disqualification took him out of the running in the final. Top five notables for the race included Ryan Shehan and Haily Taylor.

Tag Junior By Alpha Karts USA & JB Motorsports
The Alpha Karts / JB Motorsports Tag Junior racing was very close all weekend. Tyler Orum, Preston Perlmutter and Blair Hosie (Alpha Karts USA) fought each other throughout the heat and main event for the win. Orum was able to take the victory with Perlmutter and Hosie crossing the stripe in second and third. John Berry and Morgain Bain had strong weekends of competition running in the top five.

The Tag Heavy class saw Miguel Mier take the overall win against Rpm RaceKarts Driver Brian Benedict. Benedict showed great speed in his Energy Kart powered by the new X125T engine as he was able to take a heat race win but mechanical issues slowed him down in the main event allowing Mier to score the victory unchallenged. 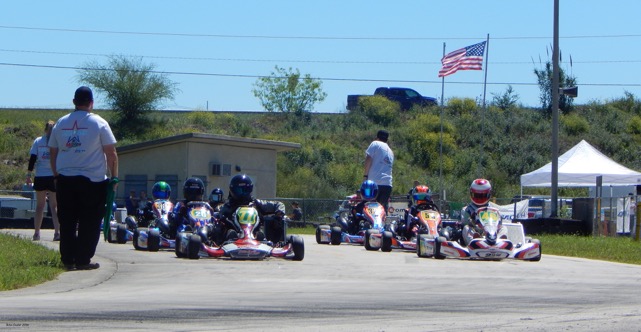 Shifter Light & Shifter Junior by Core Karting
The Shifter Light class was dominated by local driver Casey Ross (DR Kart). Ross put his DR Kart on the Pole and never looked back with two heat race wins and the main event victory to sweep the weeknd. His nephew Taylor Ross (Sodi Kart) ran Strong all weekend and had fast lap in the main on Sunday on his way to a second place result. Broch Evans (Alpha Kart USA) rounded out the podium in third as he was consistent all weekend and never strayed outside the top four. Notables for this class include Randal Burnett and Energy Kart Drivers Carson Mueller and Hannah Williams who each showed speed throughout the weekend.

Shifter Junior had a battle between brothers Liam Snyder and Mark Snyder. Liam was able to hold off Mark for the win on Sunday with Mark taking fast lap honors.

Race two for the Texas Sprint Racing Series will be May 28 – 29th at the Heart of Texas Kart Club in Waco, Texas.