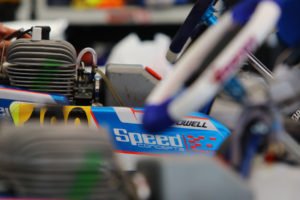 With participation in the third and final round of the ROK Cup Promotions Florida Winter Tour (FWT), Speed Concepts Racing showed speed and persistence throughout the three-day event to secure another podium result. Vortex Mini ROK driver Alex Powell finished third while Tyler Gonzalez ran up front in ROK Junior and closed the series with a strong fifth place result.

“It was an up and down weekend for us,” explained Mike Speed. “Our drivers showed a lot of speed throughout the event with all of them running in the top-ten at some point. The racing gods were just not on our side this weekend and we will focus on stronger results at the next event.”

Tyler Gonzalez had the pace early on in Junior as his fourth place qualifying effort was bettered by a trio of second place finishes in the heat races. With his consistency, the multi-time champion claimed the pole position for Sunday’s prefinal, as he looked to secure a victory to close out the series. Championship Sunday saw some uncharacteristic results from the Speed Concepts Racing driver as a fifth place finish in the prefinal would be all that could be managed as he remained P5 in the main event.

A trio of Speed Concepts Racing drivers entered the Vortex Mini ROK class led by Alex Powell. Powell claimed the pole position in the stout field of drivers but had some difficulty in the heat races and was able to manage a fifth place starting spot for Sunday. With the speed to win, Powell advanced forward three positions in the prefinal to secure a second place finish before ending his Florida Winter Tour with a third place podium result. On the strength of a solid series and a third place finish this past weekend, Powell claimed the third position in the overall series point standings as well. 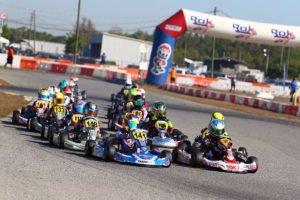 Paul Bocuse turned his 11th place qualifying run into three consistent heat races to set up a ninth place starting spot for Sunday’s prefinal. Retiring from the race early and classified in P26, Bocuse had a spirited drive in the main event gaining 13 positions en route to a 13th place result. Noah Baker ended his Florida Winter Tour campaign hot on the heels of Bocuse as he crossed the line in 14th. Baker hovered around the top-ten throughout the weekend including a seventh place result in heat three and a tenth place classification after the three heat races.

Speed continued, “The winter programs and the first quarter of the year are now complete for us. Looking forward to the summer months, we will participate at several of North America’s top karting series with the goal of continued race wins, podium results and championships as well as constant improvement for all of our drivers.”