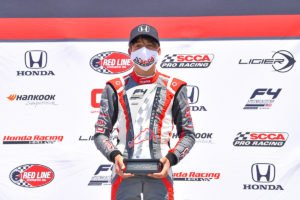 Hot temperatures and hot laps were apparent this past weekend at the Virginia International Raceway (VIR) for the Velocity Racing Development (VRD) outfit. With temperatures climbing up to the 100-degree mark and on track temps even higher, VRD was bringing the heat of their own. With a trio of F4 United States Championship Powered by Honda competitors and one entry in the FR Americas series, Hunter Yeany garnered the team’s best results taking home three podium results including two race wins and leaves VIR as the overall series point leader.

Rookie driver Kyffin Simpson showed speed and consistency near the top of the charts throughout the Promoters Test Day on Thursday, which ended early due to standing water on the track, while eventual double race winner Hunter Yeany was behind the wheel of a Formula Regional (FR) Americas car. Rookie competitor Erik Evans was coming to grips with the high cornering speeds of VIR and consistently decreased his lap times leading into the weekend. Mathias Soler-Obel showed some impressive speed in the Equiderm branded VRD Formula Regional Americas car as well, landing him in the top-ten for day two of practice.

“Our testing and practice went well, but it is time to turn up the wick for qualifying and the races,” expressed Team Manager Dan Mitchell. “I have a good feeling about this weekend, and we just need to limit mistakes and execute to get the results that we deserve.”

After qualifying on the pole position early on Saturday, race one left mixed finishing positions for Velocity Racing Development. Hunter Yeany rocketed away from his pole position starting spot to score his first official points scoring win of the 2020 season, but teammate Kyffin Simpson had a tough incident caused by an unavoidable spin from another competitor. Yeany’s win landed him in the top spot in the hunt for the championship title and solidified his presence as a title contender. Seventeen-year-old Erik Evans had a tough qualifying for the first wheel-to-wheel action of the weekend but once the green lights were illuminated, he steadily marched his way forward from outside the top-20 to an 11th place finish. 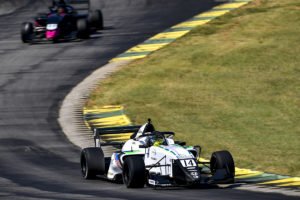 Back to the track on Sunday, the Virginia International Raceway weekend started to look up for Mathias Soler-Obel as he scored his fastest time of the weekend in race two, landing him an outside row two starting position in race three. Soler-Obel used that starting position to drive to a seventh-place result, his best finish of 2020. With one race win under his belt on Saturday, hometown racer Hunter Yeany ended his weekend with a triple podium including another victory in the final race on Sunday as he positioned himself at the front of the field before the final caution flag flew ending the race under yellow.

“I was really hoping to get that win in the second race to make it a full sweep, but I really can’t complain with three podiums,” expressed an excited Hunter Yeany at the conclusion of the weekend.

F4 US Championship teammate Kyffin Simpson achieved his best results of the season in race three with an eighth-place effort and has some momentum to build on as the team prepares for the next race weekend in less than two weeks’ time.

Virginia International Raceway will definitely be a memorable race weekend for the team and Hunter Yeany when they look back on a successful season. Their next on-track experience will be at Barber Motorsports Park July 31st through August 2nd.