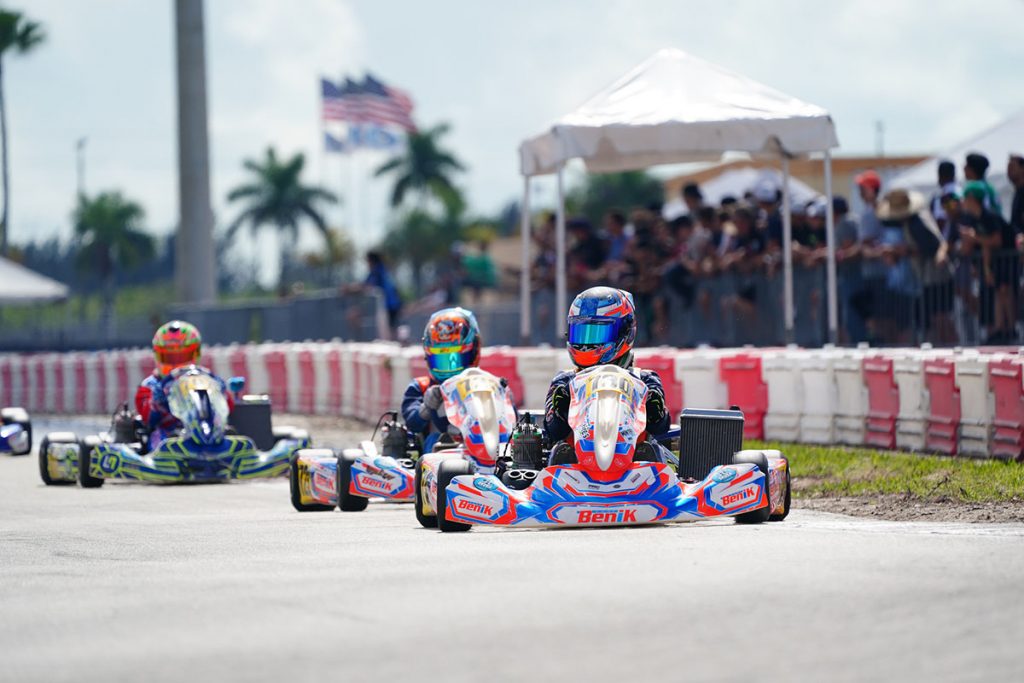 It was an up and down weekend at the Superkarts! USA (SKUSA) Winter Series finale for Team Benik. Earning pole positions, prefinal wins and podium results throughout the five-day affair, celebratory cheers were met with heartache on occasion as on track results were affected by post-race penalties, derailing what could have been a solid weekend for Team Benik. 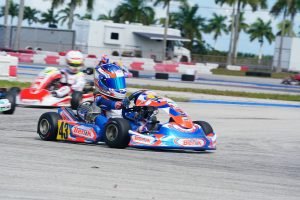 “We had some good results and great drives by our competitors, but penalties hurt us in the end,” explained Nick Mitchell. “I am proud of all of our drivers but know that some deserve better than what they left with this weekend.”

Saturday started off with a bang for Team Benik as United Kingdom’s Brandon Carr scored the X30 Junior pole position with teammate Michael Costello earning the inside row two starting position. Carr converted his pole into a prefinal win while Costello battled hard in the top-five, falling to sixth in the late stages of the race. Enzo Vidmontiene and Gavin Whitt both advanced forward from their qualifying efforts to better their results in the prefinal with Whitt going from 34th to 26th while Vidmontiene charged from 13th into the top-ten to finish ninth. The main even would see Costello work his way back to a podium position with a solid drive to third as Vidmontiene leveled up one more spot to come home eighth.

Sunday would see weather move into the area and after a brief hold, qualifying was run on wet weather tires. Carr proved his speed once again to position himself near the front of the field scoring the second fastest lap of the session while Costello put two in the top-five with a fifth-place result. Almost all the X30 Junior Team Benik drivers would all improve their positions in the prefinal as Carr moved forward to take the win and Costello was classified tenth despite a pair of penalties that pushed him down the results sheet. Vidmontiene was able to move from 23rd to 14th while Whitt gained four to come home 28th. Carr looked to have earned Team Benik their second podium result of the weekend in Sunday’s main event, but a post-race penalty relegated him to fourth, just ahead of Costello in fifth. Vidmontiene put three in the top-15 crossing the stripe in 15th while Whitt continued to gain experience with each passing lap. 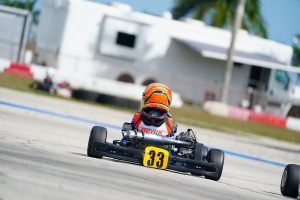 While Sunday was a day to forget for the Team Benik Micro Swift duo, Saturday saw both Troy Ferguson and Royce Vega finish in the top-ten. Ferguson scored the best results of the two in qualifying with the eighth fastest time and was able to turn that into a sixth-place result in the main event. Vega went from 15th to ninth in the prefinal and gained another two positions in the main event to finish seventh.

Beckham Toupikov was consistent for Team Benik in Saturday’s wheel-to-wheel action as he ran inside the top-15 throughout the day, eventually scoring an eleventh-place result in the end. Frankie Mossman garnered a 12th place result on Saturday and a 13th place finish on Sunday.