POLE POSITION AND PODIUMS FOR DORAN-KROLL COMPETITION IN PORTLAND 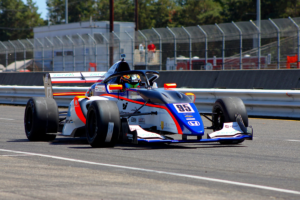 Doran-Kroll Competition competed at rounds seven and eight of the Formula Pro USA Championship last weekend at the famed Portland International Raceway. After a stressful lead up to the event, a crash during the practice session and personal changes due to Covid, Doran-Kroll Competition overcame the adversity to score four podium results and one pole position.

“I can’t recall living a more stressful and eventful week than what the racing Gods have put me through in the seven days prior to and during the event,” stated team owner Francois Doran. “This was by far the most challenging event for the team to date.”

The Doran-Kroll Competition team was plagued with both car and staffing issues leading up to this event, then, just days before the event, Engineer/Crew Chief Brandon Reed was sidelined due to Covid and the team had to find a last minute replacement. Although the team had to make some drastic changes, they decided not to let the bad luck stop them from participating in the popular West Coast F3 and F4 program. Not only did they make the event, but they were able to put their F3 car on pole position in qualifying with driver Marco Kacic, while their F4 Driver, Athreya Ramanan earn the third step on the podium in the F4 ranks.

Doran added, “Kacic and Ramanan started off the weekend on the back foot. Ramanan had an unavoidable crash in one of the practice sessions and his F4 car sustained heavy damage. Meanwhile, Kacic struggled to come to grips with some new set up changes to the F3 car during his practice session.”

The Doran-Kroll Competition team once again rose to the challenge and made the necessary repairs and adjustments to the cars in time for qualifying. Not only did the team rise to the occasion but drivers Kacic and Ramanan were also able to stay positive and mentally strong during this challenging weekend, performing when it counted, qualifying first and third in their respective classes. 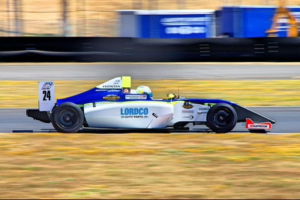 In the first F3 race, Marco Kacic started on pole position and had an intense battle for the lead, bringing the car home in second position. For the second wheel-to-wheel action on the weekend, the team made some minor adjustments to the car that gave Kacic the speed to challenge for the top spot but unfortunately, lap traffic consistently split the two lead cars. Kacic brought his Lordco Autoparts back Ligier JSF3 home in a well-deserved second position once again, securing the fastest lap of the race along the way.

In the first F4 race, Ramanan bettered his third place starting position by one to capture the second step on the podium. In the second F4 race he had another strong showing by holding on to that second position for his second podium result of the weekend.

After the way the weekend started, seeing both Kacic and Ramadan on the podium for both race days left the Doran-Kroll Competition team feeling as though they accomplished a miracle in Portland.