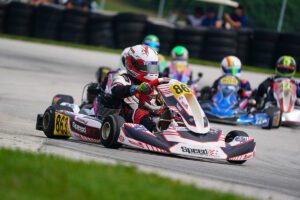 Making the long drive from Florida to Wisconsin for the third event weekend in the United States Pro Kart Series (USPKS), Speed Concepts Racing (SCR) entered a handful of drivers across multiple divisions. Taking on the CTech Manufacturing Motorplex at Road America, the Redspeed branded program scored multiple podium results as they shift their focus to the next one.

Leading the day on Saturday was Canadian Ayden Ingratta. Scoring a fifth-place result in the KA100 Junior class, after a post-race penalty stripped away a podium finish, Ingratta returned in X30 Pro Junior to climb to the second step of the podium earning the fastest lap of the race honors. Jack Jeffers narrowly missed the top-ten in the Pro Junior class after a disappointing KA100 Junior main event while G3 Argyros was a man on the mission in his first final of the day, claiming twenty-six positions and being named the biggest mover of the race to claim a top-20 result in KA100 Junior. Returning later that day, G3 added a 22nd place result in X30 Pro Junior. Following the weekend’s results, Ingratta has taken over the top spot in the X30 Pro Junior point standings with one event weekend remaining.

Scott Roberts was at the pointy end of the X30 Masters field throughout Saturday but an electrical issue in the main event relegated him down the running order and eventually forced him to retire. David Ramirez was able to complete the full race distance in the talent filled Mini Swift class as Speed Concepts Racing newcomer Alex Nowyse battled to a 23rd place finish in X30 Pro, the premier class in USPKS competition. 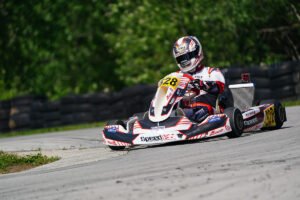 “Saturday’s results do not really tell the tale of our true speed,” expressed Mike Speed. “I feel that Ayden could have won both classes if different circumstances presented themselves and Scott could have been on top in Masters. Jack had some qualifying issues that hindered his daily results, but we will be back tomorrow to fight again.”

Sunday saw Ingratta return to the podium in the X30 Pro Junior class as he closed his weekend with a third-place result in the competitive class. Earning two top-five results on the day, the young Canadian also secured a fourth-place result in the KA100 Junior class, a class that featured more than forty competitors. G3 Argyros showed consistent and steady improvement from event-to-event and was one of the Speed Concepts Racing drivers that continually moved forward once wheel-to-wheel action began earning himself 16th and 17th place finishes in the two Junior classes. Unfortunately, Jack Jeffers had an injury on Saturday that relegated him to the sidelines and out of competition for Sunday’s wheel-to-wheel racing.

Rebounding from his DNF on Saturday, Scott Roberts found himself in the top-five when the final checkered flag flew in the X30 Masters division as he crossed the stripe in the fourth position. Alex Nowysz continued to battle in the X30 Pro class gaining experience with the Redspeed brand and Speed Concepts Racing program finishing 23rd in the main event.

Speed added, “A huge thanks to all of our team members, drivers, mechanics, families and supporters. We are already looking forward to the next one.” 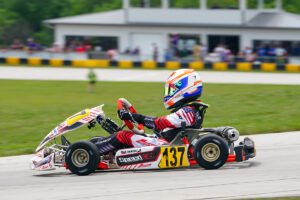 Speed Concepts Racing has the opportunity to add a few more drivers in 2021, especially as the program heads into the ROK Cup USA ROK Vegas and Superkarts! USA SuperNationals. Please contact Mike Speed at Mike@Speed-Concepts.com.