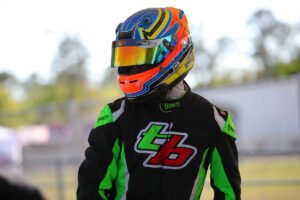 Entering the final round of the ROK Cup USA Florida Winter Tour, TB Kart USA brought six drivers across three classes in the hopes to finish the popular winter series on a high. With a new driver in the VLR Senior class, the Florida based program earned one pole position, three podiums and four top-five results at Ocala Gran Prix as they now shift their focus to the second quarter of the 2021 karting season.

Starting in the sixth position and choosing slick LeVanto tires as the track was beginning to dry, Ruben Caceres tiptoed his way for the first half of the VLR Senior main event as he began to build heat in his tires. Slowly and methodically working his way forward, Caceres advanced forward lapping one to two seconds faster than the eventual race winner. Closing the gap from thirteen seconds to only two when the checkered flag flew, Caceres crossed the line in second and earned his first career Florida Winter Tour podium.

“What a great end to the weekend for Ruben,” explained TB Kart USA’s Farshad Bagheri. “He was able to keep his kart on track and take advantage of other’s mistakes. His speed increased as the track dried and he is well deserving of the podium finish.”

In the Master Shifter ROK class it was Rene Martinelli that showed speed in qualifying to earn the pole position. Scoring a heat race win, Martinelli also earned the prefinal win before finishing fifth on Championship Sunday. Pete Licciardi had an incredible drive in Sunday’s final to put two TB Kart USA drivers in the top-five with a third-place effort as Farshad Bagheri crossed the line in ninth. Austin Jordan was consistently in the top-ten throughout the weekend but an issue in the final prevented him from completing the full race distance. Courtesy of his two podium results and three top-five finishes, Rene Martinelli was named the Master Shifter ROK Vice Champion. 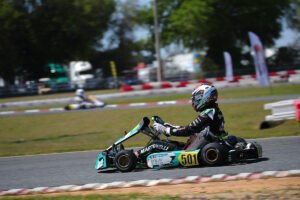 Zach Hollingshead put TB Kart USA in the top-five in Shifter ROK as he had one of his better weekends at the 2021 Florida Winter Tour. Taking advantage of some wet weather action, Hollingshead held his own against some of the best shifter drivers in the country. Showing the speed of the TB Kart shifter chassis, Hollingshead added to the TB Kart USA results resume. Nick Trumbull secured a 13th place finish.

Bagheri continued, “With the first quarter of the year now behind us, we will look back at some of our strong performances, both here and in Europe, to build on our success and forge ahead. Our goal is to expand our race team and dealer network and now is the best time to do it.”

For more information on TBKart USA please contact Farshad Bagheri at 727.204.7633 or via email to FBagheri@TBKartUSA.com. TBKart USA can also be reached online at www.TBKartUSA.com or by searching TB Kart USA on the Facebook, Instagram, and Twitter social media platforms. If messaging is your preferred method of communication, please log on to Facebook and message the TB Kart USA page for a quick response.