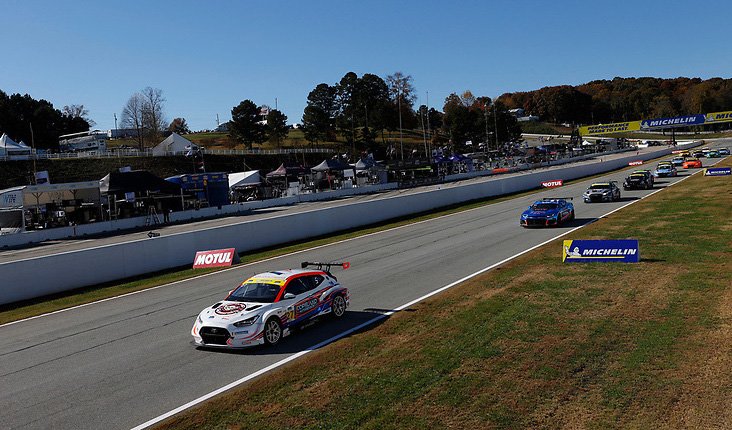 Looking to build off their second-place result at Road Atlanta one year ago, Tyler Maxson and Tyle Gonzalez were back at the Braselton, Georgia Road Atlanta facility hunting for a race win in the final IMSA Michelin Pilot Challenge event of the season. With multiple podium results and pole positions on the season, the young duo was searching for their first win to close the season on a high and carry that momentum towards the 2022 season. 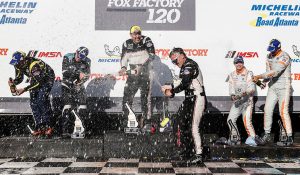 Approaching the weekend with a setup from last year, the teenage duo had an uneventful first practice session as both drivers were able to complete laps. Practice two saw drivers complete longer runs on older tires to work on race pace.

“Last year we performed well but our weakness was on older tires later in the stint,” explained Maxson. “As a team, we really wanted to get this right to have a better shot at standing on the top step of the podium this year.”

Gonzalez would take the controls for qualifying and though the #27 Copeland Motorsports entry lacked a little one lap pace, he managed to put together an impressive lap that locked them into the third place starting position inside row two.

“We made a change right before qualifying thinking we needed to tighten up our Hyundai Veloster N TCR machine,” added Gonzalez. “The sun came out right before we went out so maybe it wasn’t the best decision, but in the end, I was able to clock the third quickest time would roll off the grid from row two for the two-hour race.”

Gonzalez maintained control for the starts of the race and drove one of his best stints of the season. Moving to the second position on the start, Gonzalez was able to set the fastest lap of the race on lap four as he continued to stalk the leaders. As it is in endurance racing, yellow flags would slow the pace and pit stops would cycle through as Gonzalez managed to maintain his position towards the front of the field.

With driver changes happening with less than seventy-five minutes remaining, Tyler Maxson would get behind the wheel as he looked to seal the deal and score the win. After exiting the pits in third and a few additional caution periods and pit stops, Maxson pitted his Copeland Motorsports entry for a splash of fuel and came out on the top of the time sheets. Leading late but forced to save fuel, the #27 fell one position to second and then a few laps later, was down to third. As the race went one and fuel was no longer an issue, Tyler was told he could go full rich as he closed the gap to the lead duo. Moving to second in the late stages, Maxson made a bid for the lead in turn seven on the final lap, completing the pass but unable to hold the position. Crossing the line with the leaders running side-by-side-by-side, Maxson crossed the stripe in third.

Maxson added, “I was by and in the lead for about three seconds but overshot the corner, dropped two wheels and lost momentum. Unfortunately, I fell two positions and we finished third, but I would rather go for the win and finish where we did then sit in the second position.” 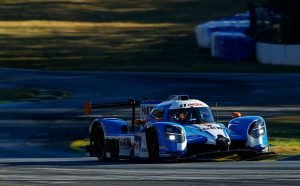 Pulling double duty on the weekend, Maxson also complete in the IMSA Prototype Challenge and took the green flag with only one lap of practice. As an electrical issue forced them to the sidelines in the first practice, practice two saw a handful of red flags and only one lap for Maxson that put him sixth on the timesheets.

With his co-driver, CR Crews, qualifying the car in the fifth position, the electrical issue would reappear at the start of the race as the team was forced to the pits. Falling eight laps behind the leader, Maxson would take over late in the race running fast and consistent race laps that were comparable to the leaders.

“The Prototype is an awesome car,” added Maxson. “I hope I get a chance to do it again as I think with a few more laps of practice, we could be in contention for wins.”