Traveling to the famed Red Bull Ring in Spielberg, Austria for this past weekend’s ADAC Formula 4 event, American driver JM Correa would walk away with a silver after scoring a second place result in race two. Having the pace to run in the top-five throughout the event, the Prema Team driver would once again need to overcome some adversity and will now shift his focus to the next event in three weeks’ time.

“We had a good qualify session and continued to improve which was the plan,” explained Correa. “The goal for qualifying was to be in the first three rows and we accomplished that. The Prema Team prepared a great car and I was able to turn the fifth fastest lap of the session. It is always great racing at the Red Bull Ring as the facility and staff here are some of the best that we see throughout the season.”

Race one would not go as planned for Correa, as a great start resulted in being pushed off track by a fellow competitor and relegated him down the running order. Falling back to 24th, the Prema Team driver showed his speed and experience as he began to march his way forward through the field. Passing cars lap after lap, Correa would end his first of three races on the weekend in the eleventh position.

The sign of a great driver is the ability to overcome difficult circumstances and Correa did just that in race two. Putting the results from race one behind him and with another terrific race start, he was able to move into the fourth position early and keep his eyes forward to the front of the field. Racing hard and utilizing his passing experience gained from race one, Correa made some veteran decisions as he moved into a podium position. Ending the race in the second position, Correa would once again be able to enjoy a podium celebration.

With race three on the schedule only six hours after the end of race two, there was very little time to celebrate as the entire team went back to work. Looking to repeat the success from race two, the American driver would suffer an unfortunate tire puncture after starting in the 11th position and be forced to retire from the race. 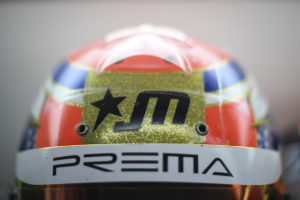 Correa added, “With the increase in performance and speed, I am able to battle at the front of the field with the top drivers in the championship. In every race this weekend, I had the speed to challenge and battle for a podium result but need to manage those battles better personally. We as a team need to continue this at each event moving forward and fight for every championship point possible.”

Currently sitting in the eighth position in the Drivers Championship, JM Correa and his Prema Team are the leaders in the team championship as they look towards the fourth event weekend in the ADAC Formula 4 Championship. Set for July 7-9 at the Motorsport Arena Oschersleben in Oschchersleben, Germany, Correa will return to the sight of the first event of 2017 with the main focus on podium results and points as the season closes in on the halfway mark.