PODIUM FOR SETH LUCAS AT THE HANKOOK 24 HOURS OF DUBAI 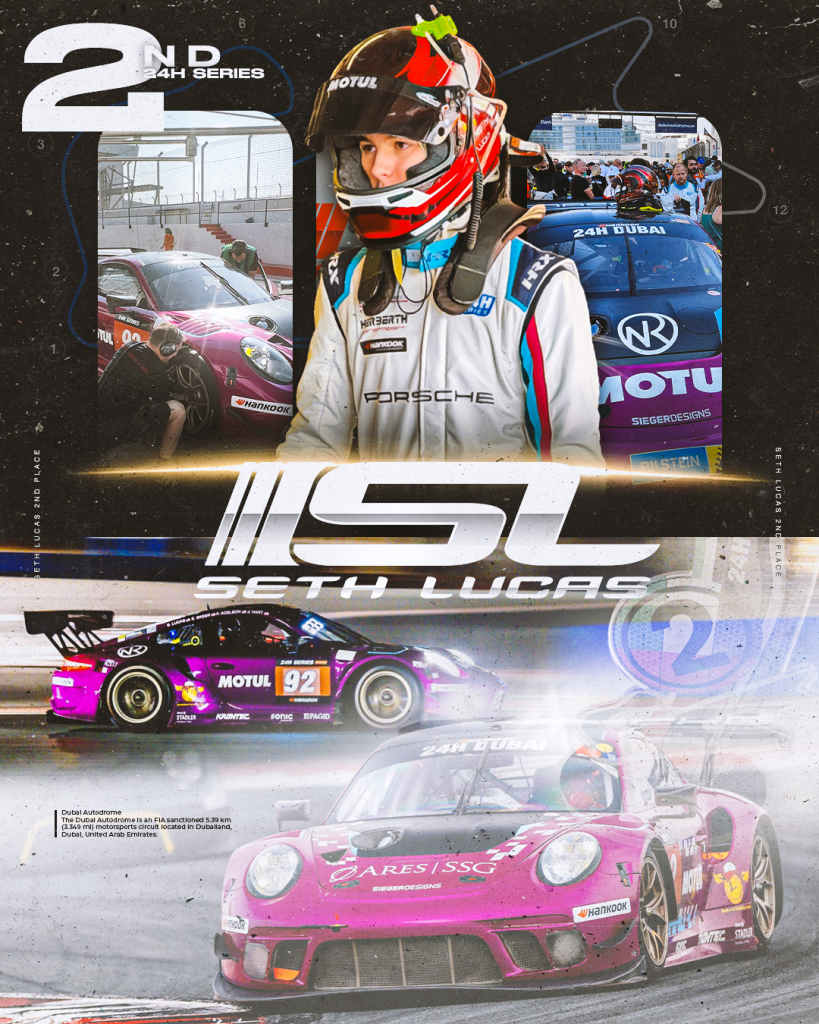 It was a podium-winning weekend for Seth Lucas and the quartet of drivers in the Herberth Motorsports, Motul-branded Porsche 991 #92 entry at the famed Hankook 24 Hours of Dubai this past weekend. Racing alongside Adam Adelson, Jason Hart, and Elliott Skeer in the Pro / Am class, the American quartet finished second in class and sixth overall as Herberth Motorsport placed their machines on the top two steps of the podium.

“What a race. What an event. What a team,” exclaimed Seth Lucas following the long and grueling 24-hour race. “The goal this weekend was to gain experience behind the wheel of a Porsche but quickly after getting on track, we realized that we had a shot at not only the class win but the potential overall win. The team did a great job in prepping a car that would allow us to compete at the front of the field, and this is an event that I 100% want to race at and win in the future.”

Following a few days of testing and practice in both the day and night, it was time for qualifying, and the #92 machine slotted into the third position in class following the timed session.

Lucas continued, “We qualified well, and the focus was immediately shifted to the race. We had the plan to be cautiously aggressive and take care of the equipment. We needed to make sure we limited our mistakes and that would give us a shot in the end. We did almost all perfectly and put up a fight all the way until the checkered flag.”

Set for his North American debut behind the wheel of a Porsche with MDK Motorsports in a few months, Lucas will pilot a Motul USA Porsche 992 in the SRO Motorsports Group-promoted GT World Challenge America beginning late March at the picturesque Sonoma Raceway.

Be sure to follow the Seth Lucas Racing social media pages for news, information, photos, and results throughout the 2023 race season.

Seth Lucas would like to thank Herberth Motorsports, MDK Motorsports, Motul USA, and Porsche for their support as we move onward into 2023.

For more information on Seth Lucas, please contact Chris Lucas via email at Clucas@TeamLucas.org or visit Seth Lucas online at www.SethLucasRacing.com or by searching for him on social media via Seth Lucas Racing.