PODIUM AND POINTS FOR JUAN MANUEL CORREA IN FRANCE 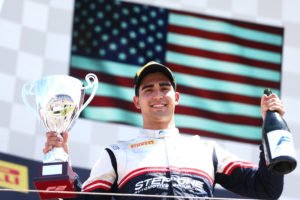 Traveling to France for rounds nine and ten of the FIA Formula 2 Championship, American driver Juan Manuel Correa secured two point scoring positions finishing seventh in race one of the weekend and second in race two. Overcoming a twelfth place result in qualifying to drive forward, Correa maintained his front row starting position in race two to close the weekend with his second podium result of the season.

After a qualifying session on Friday that saw multiple red flags and a people caught out on different strategies, Correa and the Sauber Junior Team by Charouz were a bit unlucky but fought hard throughout the weekend. Not only did the American driver turn heads once again, he was able to vault his way up in the point standings as the F2 program ran alongside the Formula One World Championship

“Overall, Friday was a positive day. Practice was positive and we had decent pace in qualifying, but just didn’t put it all together,” explained Correa. “It was a very messy session with two red flags, a lot of cold tire running and more. We couldn’t follow our program so some people got a bit luckier than others and I think we just missed it on the day. We definitely had the pace for a top eight, so it is positive to have that pace especially after the difficulties that we have had in the past two events in qualifying.”

Looking forward to Saturday’s first wheel-to-wheel action of the weekend, Correa started outside row six and drove a superb event. Marching his way forward into a points scoring position, Correa grabbed six points in the overall championship as he finished seventh on track. On route to his seventh place finish, Correa also secured a front row starting position for his Sauber Junior Team by Charouz machine for the second wheel-to-wheel action of the weekend.

“Race one was very positive. To finish seventh and put six points in the bag for the overall championship is good,” explained Correa. “Race two could also be positive as well based on our front row starting position.” 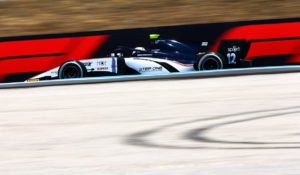 From his second place starting spot, Correa scored his second career FIA Formula 2 Championship podium. One of only seven drivers to score points in both races over the weekend, Correa moved back up in the point standings to the eighth position.

“While I am happy with the result, we lost race two right from the start. We need to take a look at everything and see what happened and why,” explained Correa. “I nearly stalled so just to get off the line was good. I had to fight quite a bit to come back but hoping this is a springboard of momentum into next weekends event in Austria.

With no time off, Juan Manuel Correa and the Sauber Junior Team by Charouz will travel to Austria to compete this coming weekend, June 28 – 30 at the Red Bull Ring in Spielberg, Austria.