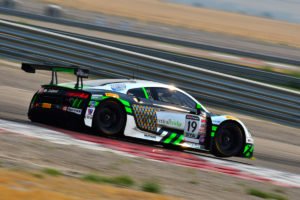 “It was a great weekend for us,” expressed Parker Chase following his second place podium result on Sunday. “We did what we had to do to win the SprintX championship. Ryan handed me a car in perfect condition and I couldn’t be happier! The Audi was spot on all weekend and I’m happy to deliver results for them.”

“Super happy to win the championship with Parker,” added Ryan Dalziel. “We came into the weekend with a plan and knew what we had to do, and as a team we executed flawlessly. Proud of the team and happy to get Audi their first GT3 championship in 2018.”

Struggling slightly with pace in the two official practice sessions on Friday, Parker took the wheel during Saturday morning’s qualifying session and put his Audi Sport customer racing R8 GT3 LMS in the third position. Lining him up inside row five in the multi-class racing format, the duo needed to be cautiously aggressive in their approach to obtain the ultimate goal.

Playing the points game to give them the best shot at the series title, Chase took the green flag and methodically began to work his way forward. Handing the wheel to Ryan around the halfway mark, Dalziel brought #19 home in the second position, adding to their 2018 podium total. Race two on the weekend would see another podium performance by the Chase and Dalziel duo. Ryan Dalziel would take the green flag before handing the controls to Chase, who closed the race in style, adding their second podium result of the weekend and their first SprintX Pro/Am Championship and first GT3 championship for the Audi brand in 2018. 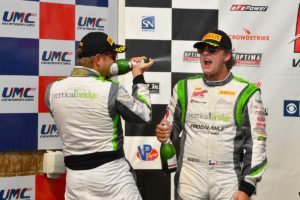 “When a season ends, every team looks back at all the adversity it faced and has many moments where you have only if, or could have, should have situations that keep them from winning the championship,” added Team Engineer Peter Baron. “We had an enormous amount of these moments, but it’s how we responded to them, which is why we can wake up on Monday as champions. I’m very proud of how everyone grew on this team over the course of the season and was executing flawlessly when it counted. It was also an amazing journey to see 17-year-old Parker grow over the last six months as well. We can now take a sigh of relief and enjoy the championship as well as start planning for next season.”

“We achieved the goal of the season and it is a great feeling to make it all come together,” explained Hunter Wright. “Really proud of not only Parker and Ryan, but the whole team for their hard work and efforts both on and off the track. We have a great group of people in our program and I am just thankful to be a small part of everything.”