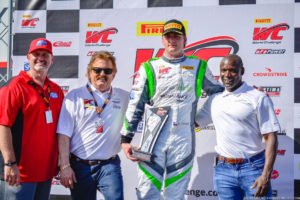 Taking on the Pirelli World Challenge Grand Prix of St. Petersburg, Texan Parker Chase entered his first official event as a TruSpeed AutoSport driver. Piloting the #19 Vertical Bridge / New Braunfels Visitors and Convention Bureau / ProBalance Protein Water Audi R8 LMS, the 17-year-old Chase showed speed and persistence in the GTA division as he was one of the drivers to beat throughout the weekend.

“Today looked really promising based on our speed in practice and qualifying,” explained Chase. “I was confident going into race one and thought we had something for a class win and top-five overall. Going into turn one there was a lot of carnage but I managed to get around until I saw a damaged Bentley coming straight for me. I avoided him and a lot of potential damage but ended up bouncing off the outside tire wall. There was very little damage to the car but when I tried to put it in reverse and pull away, something gave up in the gearbox. The TruSpeed guys worked into the night to get it changed and we will be good to go on Sunday.”

With lap times in race one setting the grid for Sunday’s wheel-to-wheel action, Chase was forced to start from the tail of the field due to not turning a timed lap. Focused to make it through the opening complex of corners and charge hard through the 40-minute event, Chase proved that his practice session speeds were no fluke.

“I played it a little cautious on the start but once the first few corners were behind us, I worked hard to push forward. There were several cautions and an eventual red flag that ended the race early, but I was very happy with the progress and impressed with the work from our TruSpeed AutoSport crew to get the car ready and reliable during race two. We missed the setup slightly with the changing weather conditions from Saturday to Sunday and the fact that we were unable to complete a lap in race one, but overcame that shortfall with a podium result.” 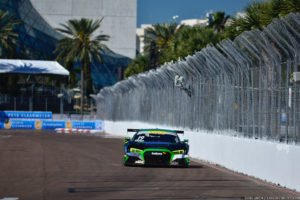 Starting shotgun on the field, the New Braunfels resident advanced forward throughout race two gaining seven positions to finish third in class and seventh overall. With his great start, Chase was the recipient of the ‘Start of the Race’ award and continued his advancement up the running order to also earn the ‘Hard Charger’ award and celebrated with his first podium result of the 2018 racing season.

“I need to send an extra special thank you to the Audi Sport crew that was on site and provided great technical support this past weekend. With them and TruSpeed in my corner, I feel like we have one of the best programs in the paddock. Also a big thank you to everyone from Vertical Bridge that came out last weekend. It was a pleasure to have them on site and provide them with some race day experiences,” Chase continued. “I love St. Pete but I can’t wait for the next event at my home track. I will have plenty of friends, family, partners, sponsors and guests from the New Braunfels Visitors and Convention Bureau on site cheering me on and I look forward to making them proud.”

With only one weekend off, Parker Chase and his TruSpeed AutoSport prepared Audi will hit the track March 22 for the second event weekend of the season. Taking place at the famed Circuit of the Americas, a promoter’s test day will take place on Thursday before official competition commences on Friday, March 23rd. Stay tuned to all Parker Chase social media pages for event information, live timing links, results and photos.