PARKER CHASE DOUBLES UP ON PODIUM RESULTS IN TEXAS

Competing in his home state of Texas and at one of his favorite facilities, the Circuit of the Americas, 16-year-old Parker Chase stole the show in the Pirelli World Challenge GTS division. Driving the Performance Motorsports Group prepared Enertech Resources / Protein Water by ProBalance / New Braunfels Convention and Visitors Bureau / City of New Braunfels backed Ginetta G55, the talented Texan drove from dead last to stand on the podium Saturday, and backed that result up Sunday with his second podium result in as many days. 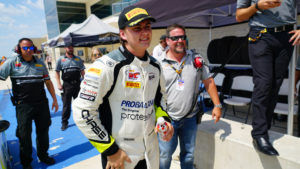 “We were not as quick as we thought we would be and to receive a penalty post session was frustrating,” explained Chase. “Having to start the race from dead last, it was definitely a fun one and the Performance Motorsports Group car was hooked up.”

Driving from 23rd and dead last on the grid, Parker Chase sliced and diced his way through the field as he marched his way forward. With fast and consistent race laps, a heated battle would ensue as Chase continued to put pressure on his fellow competitors. Claiming the third fastest lap of the event, Chase solidified an inside row two starting spot for Sunday while driving his way to the podium.

The 16-year-old continued, “I was happy to stand on the podium in the third position but it was not until later that I found out about a disqualification in front of me elevated me to P2. Super happy for all my team and supporters, but tomorrow I will look to do one position better.”

Sunday would see a much calmer event as Chase settled into the third position after the opening complex of corners and kept the lead duo in sight. Swapping positions with his teammate on a few occasions, the two Performance Motorsports Group drivers were unable to make a bid for the lead. Holding off the advances of fellow competitors, Chase would cross the line in the second position to garner his second podium result in as many days.

“I had a good battle with Harry and it looked as if we were going to both be on the podium,” Chase added. “It was disappointing not to get the win, but also upsetting that Harry could not join me on the blocks.”

Next up for Parker Chase and the Performance Motorsports Group will be the Grand Prix of Sonoma. Taking place at the Sonoma Raceway in Sonoma, California over the September 15-17 weekend, Chase will look to carry his momentum to Wine Country to score that elusive victory.

Parker Chase, Chase Racing and Performance Motorsports Group would like to thank their supporters. A huge thank you to Ginetta Racecars for providing top notch equipment and also to the Pirelli World Challenge for providing a series to showcase the cars and drivers. Parker Chase would also like to thank Protein Water by ProBalance and New Braunfels Convention and Visitors Bureau as well as the City of New Braunfels.