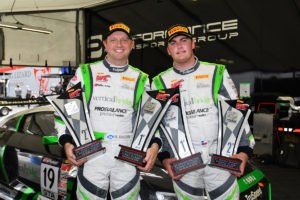 It was another winning weekend for Parker Chase as he and his Pirelli World Challenge SprintX teammate Ryan Dalziel topped the podium at Lime Rock Park. Piloting the #19 Vertical Bridge / New Braunfels Convention and Visitors Bureau / ProBalance Protein Water / Music Movement Audi R8 GT3 LMS, the duo secured top honors in the first race of the weekend and returned later that day to add a second place podium finish for their first double podium of the season.

“What a weekend!” expressed Chase. “Everything went very smooth for us as a team and we were able to execute. Claiming the pole position on Saturday, we had to wait until Monday to run our races, but the wait was worth it.”

Leaving the facility Saturday thinking they had qualified second in class, Chase and his TruSpeed AutoSport outfit learned that the pole position had been awarded to them after post qualifying technical inspection. Taking advantage of the premier starting position, 17-year-old Chase would take the wheel for the start of race one and hold his own.

“I just put my head down and tried to put together some consistent race laps,” added Chase. “With two races on the same day we had to be a little cautious not to damage the car, so running out front was the perfect plan.”

Taking the lead in class, Chase and co-driver Ryan Dalziel had a flawless driver change as the duo took the checkers claiming the Pro/Am victory while finishing fifth overall, their highest overall finish of the 2018 season. 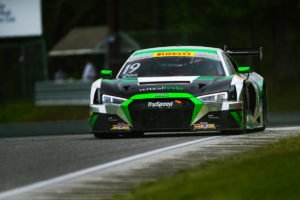 “It was a great event for us as a team as we really have come into our own,” explained Dalziel. “We have a better understanding of the Audi GT3 machine and can put all that knowledge into on track speed.”

Dalziel started race two before handing the controls back to Chase just past the halfway point. Running in the seventh position overall and second in class, Chase and Dalziel would stand on the podium for the second time on the weekend adding an impressive second place podium result.

Chase continued, “It is not often that we can have the results that we have been achieving. We have now claimed two victories and seven podium results on the season and will be looking for more next month at Road America.”