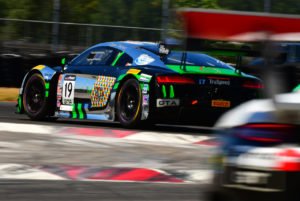 “We did it. Weekend sweep and overall winners in race two! Most incredible feeling ever,” exclaimed Parker Chase. “Couldn’t ask for anything else. Great car, great team, and a great teammate. Really good points for the GT SprintX Pro-Am championship as well as overall title. Utah can’t come fast enough.”

Never putting a wheel wrong throughout the weekend over the twelve-corner, 1.967-mile Portland International Raceway, Chase and Dalziel led every on track session claiming the top spot in both practice sessions before claiming the pole position during Saturday morning’s qualifying attempt. From that point on, the current Pirelli World Challenge GT SprintX Pro-Am championship point leaders were unstoppable.

With Chase taking the green flag for race one, a steady and consistent run was put forth before handing the controls over to Dalziel for his stint behind the wheel of the GT3 Audi machine. As one of the top sportscar drivers around the world, Dalziel went to work, maintaining the point and securing the top step of the podium in Saturday’s Pro/Am event. Satisfied with their results but wanting more, the talented duo returned to the track Sunday afternoon with Dalziel taking the green flag. Chase jumped back in the car for the second half of the race and showed great poise and determination to close the weekend with another victory but not before some late race drama.

“Parker had an amazing restart and took the overall lead entering the first complex of corners,” explained Team Technical Director Peter Baron. “There was an incident behind us which resulted in several cars straight lining the chicane and passing us off track that resulted in us crossing the line at the end of the race in the second position. Unfortunately, the results could not be rectified before the podium but happy that the PWC officials collected the proper video evidence and applied the necessary penalties, thus declaring us the official winners of both the Pro/Am event as well as the overall winners. Great weekend for the team and our partners.” 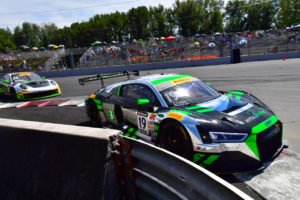 “What a fantastic weekend. We rolled off the track with a great Audi under us,” added Ryan Dalziel. “Our team kept making small improvements each session and we finally got a double Pro/Am weekend but even more amazing an overall win against full Pro/Pro teams. Couldn’t be happier or more proud of this team, especially Parker Chase, who has been kicking serious butt the last few races. Great points day in GT SprintX Pro-Am Championship extending our lead also, so just a fantastic weekend all around.”

Parker Chase, Ryan Dalziel and the Pirelli World Challenge program will now enjoy three weeks off before traveling to the Utah Motorsports Campus for the August 10-12 weekend as the GT SprintX Pro-Am championship point leaders. With huge success in Portland, the duo will have the target placed firmly on their backs as they enter the final round of the GT SprintX Pro-Am program and look to secure the title.