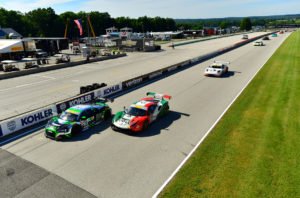 A trip to the Dairy State to compete at one of the famed racetracks in North America, Parker Chase added another victory and two podium results to his 2018 resume. Taking on the iconic Road America facility in his #19 Vertical Bridge / New Braunfels Convention and Visitors Bureau / ProBalance Protein Water / Music Movement, eRaceAutism.com Audi R8 GT3 LMS, Chase added a solid second place podium result on Saturday before topping the blocks on Sunday with a last lap pass to take the win.

Showing his speed in the Pirelli World Challenge GTA class, Chase would consistently be near the front of the field in the four short practice sessions. Continuing with his pace on Saturday, Chase was once again near the pointy end of the field, qualifying second in class and setting himself to challenge for the race win.

Biding his time throughout the first wheel-to-wheel action of the weekend, Chase saved his tires and equipment as he stalked the class leader. Taking the lead at the start of the final circuit, the young Texan was unable to defend on the long straightaways and would stand on the second step of the podium.

“Unfortunately, today, we did not have the top speed that the Ferrari had,” explained Chase. “We had a good battle and I know what we need to do tomorrow to try and challenge for the win.” 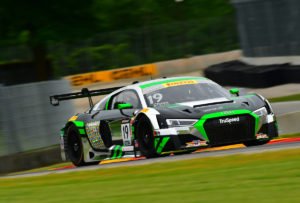 With marketing partners on site and Alex Gellman, CEO of Vertical Bridge, giving the command for drivers to start their engines, Chase delivered a win on Sunday with a last lap, last corner pass. Again, stalking the leader for the majority of the event, the Vertical Bridge backed driver was bound and determined to deliver his sponsors a victory, and he did. Battling wheel-to-wheel on the final circuit with the Ferrari, Chase used the torque of his Audi to make an aggressive move and take the lead and eventual checkered flag.

Chase added, “I learned from yesterday and positioned my Audi exactly where it needed to be to use its strength and get to the front. This is my third victory in the past three event weekends and another double podium for the team.”

With a few weeks off, Chase will make his first start at the Portland International Raceway during the July 13-15 weekend.