The Streets of Lancaster Grand Prix brought many accomplishments this past weekend for P1 Engines. The California engine builder would claim multiple wins, podiums, and championships at the final round of the Superkarts! USA (SKUSA) California ProKart Challenge as they now shift their focus to the granddaddy of them all, the SKUSA SuperNationals.

P1 Engines X30 Junior drivers dominated the field the entire weekend. After starting the weekend with a strong third place qualifying run, Oliver Calvo of PKS Kart Supplies continued to improve and won both heat races. He continued to dominate and took home the win in the final, his second win of the year. Dante Yu of Formula Works/J3 Competition posted consistent results all weekend, ending with a third place finish in the final. This gave Yu just enough points to secure the X30 Junior championship for the series. Kameron Perry of CRG So Cal/Empire Karts brought home a solid fourth place finish for the weekend.

In X30 Masters, Mike Rolison of Rolison Performance Group swept the weekend once again. Rolison dominated all on-track action, which led him to a win in the final and a first place in the series championship. 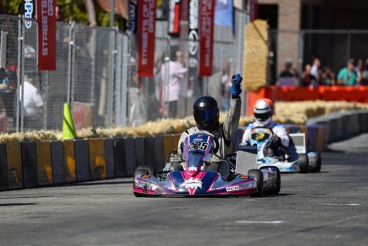 In X30 Senior, driver Nick Ramirez secured a second place starting position in qualifying, going on to take the win in heat one. With an unfortunate finish in heat two, he came back in the final looking for redemption. Starting in last place, Ramirez drove his P1-powered kart to the front, battling for the top spot. When the checkered flag waved, he was able to earn a spot on the podium with a strong second place finish. He also secured third place in the series championship. P1 Engines pilots Garry Lyles, Tomas Mejia, Jacob Gulick, and Jarred Korth all scored top-ten finishes in the final. Driver Oliver Calvo took home second place in the series championship.

In Micro Swift, Ethan Naciemento drove hard all weekend, coming from the back of the field in the final to earn a second place podium finish. Logan Toke ran in the top-five all weekend and secured a fourth place finish in the final.

In the Mini Swift class, driver Daniel Inzunza was a consistent top-five contender all day. In the final, he lead the field until the last corner on the final lap. Inzunza would end his day with a solid sixth place finish.

P1 Engines would like to congratulate Dante Yu and Mike Rolison on their championships, as well as everyone else who supported our engines this season.