The fifth round of the SuperKarts! USA (SKUSA) California ProKart Challenge in Santa Maria, California brought success once again for P1 Engines. Posting strong results all weekend, the California based engine builder would claim wins in the X30 Junior and X30 Masters classes, along with many more top-ten finishes, as they continue to close out the 2016 season.

P1 Engines powered drivers set the pace for the weekend in the X30 Junior Class. Drivers Dante Yu and Oliver Calvo dominated the field. Yu snagged the pole over Calvo in qualifying, and each earned a victory in the heats that followed. In the final, Calvo took the lead at the start. During the race, Yu was able to pass Calvo for the lead and held on to it until the finish, earning himself the win. Calvo scored a strong second place finish. Fellow P1 powered driver Gary Lyles ran consistently in the top-five, earning himself a fifth place finish in the final. Jared Korth set personal records, earning his best finish yet in heat two by finishing third. He fell back in the field during the final, but was still able to finish with a solid seventh place run. Calder McWhinney recovered from an unfortunate 19th place qualifying run and finished eighth in the final. Jacob Gulick posted strong results with a ninth place finish in the final. Tomas Mejia came from a last place starting position, resulting from a crash in an earlier heat, to score a tenth place finish in the final. 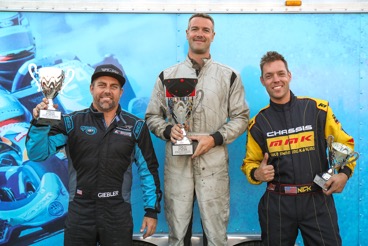