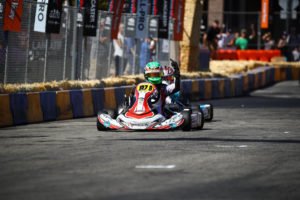 P1 Engines powered X30 Senior driver Dante Yu came into the event looking to make it two in a row after scoring the victory last year. Yu managed to improve on his overall results by winning each and every on track session. Grabbing the pole position, two heat race wins and the main event victory, Yu added another win to his racing resume and checked another box for P1 Engines.

Fellow X30 Senior pilot Colby Dubato had a great qualifying effort with a third place result but had no luck once wheel-to-wheel action began. At the end of the day, contact sent Dubato down the running order to an eventual 12th place result. Nick Ramirez improved from his heat one DNF to work his way through the field in heat two, and score a fifth place result in the day’s final. P1 Engines drivers Jesse Gutierrez and Gary Lyles rounded out the top-ten finishing ninth and tenth respectfully.

Oliver Calvo entered the KA100 Junior division for the first time at the Streets of Lancaster event. Coming off a win at the IKF Grand Nationals, Oliver began his weekend with a third place qualifying effort. Through the two heat races, Calvo struggled, but when it mattered most he was able to move back to the point and scored the victory. With the win, Calvo was guaranteed a $1000 payday and is the only driver eligible for the shot at the $10,000 payday at the SKUSA SuperNationals. Frankie Mossman also entered the KA100 Junior class and ran in the top-three all weekend. In the main event, Mossman made his way from the back of the field to catch the leaders, but a broken throttle cable forced him to retire. 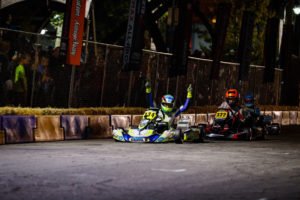 In the IAME Micro Swift division, Logan Chambers drove great all weekend in his first career street race and improved in every on track session. Keeping his nose clean and out of trouble, Chambers secured a second place result and celebrated on the podium at the end of the event.

X30 Junior driver Alan Tang had an up and down weekend. With heavy contact in heat two, he was forced to start the main event at the tail of the field and try and work his way forward. Alan put his head down and drove like a veteran up to P3 and set the fastest lap in the main.

Next stop for P1 Engines will be the granddaddy of them all, the SuperKarts! USA (SKUSA) SuperNationals in November.