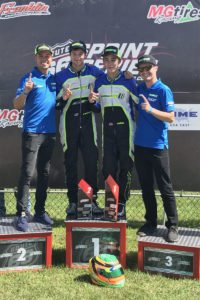 Staying ahead of the curve in karting is difficult but California based P1 Engines is doing just that. Focusing on the 100cc market, which is making a major push to return to the top of the karting food chain, P1 Engines has been producing race winning IAME KA100 packages alongside their X30 powerplants.

“I wanted to be a part of this movement because I feel that it’s something that karting needs,” explained Jesus Vasquez, Owner of P1 Engines. “It’s a package that fills the large void between the L0206, Yamaha, Cadet and X30 packages. Knowing this, we started working on the KA engine early in the year and have had some huge success as our research and development work continues.”

This past weekend, Milrock Motorsports, which has been a long supporter of the P1 Engines program, gave P1 the opportunity to showcase KA and X30 power at the Route 66 Sprint Series. With only a select few drivers, the P1 Engines power and development work proved to be on pace, and ahead, of rival engine builders.

Stephen Dial started the weekend showing great race pace and qualifying on the front row for both days of wheel-to-wheel competition. Once the green flag flew and the racing action commenced, Dial never looked back taking both heat race wins along with the two main event victories en route to the fastest lap of the event.

Vasquez added, “We appreciate both Milrock and the Dial families’ hard work. Utilizing the weekend as a test for the P1 Engines power and Dial, the only P1 powered driver in the class, it was not expected that we would stand on the podium at the end of the day. Stephen proved us wrong as his natural skills and abilities along with our power, was able to take the checkers.”

Lane Vacala ran in the X30 Senior class and similar to Dial, showed great pace throughout the weekend. Claiming a second place result in Saturday’s main event, P1 Engines proved that both their X30 and KA100 engines are potent packages on the regional and national level.

Along with winning back east, P1 Engines was also on track in central California taking on the International Kart Federation (IKF) Grand Nationals where the KA100 Senior class has exploded onto the scene and had a field of more than twenty with their eyes on the prize, the triple crown 10K to win.

PKS Owner Glenn Araki had a pair of drivers throw their hat into the mix last minute and P1 Engines went to work on preparing the best engine packages possible. Colby Dubato entered the KA100 Senior ranks while junior frontrunner Oliver Calvo would fight for the win in KA100 Junior.

Vasquez continued, “Both drivers, along with the help of PKS were clearly the class of the field as they took the top spot in each and every on track session. With the dominant performance, the pair of drivers would take the Screaming Eagle and Duffy awards and are now the only two drivers eligible for the Triple Crown, which is worth $10,000 to each driver.”

Next stop for P1 Engines will be the Superkarts USA (SKUSA) Lancaster Grand Prix and then the annual SKUSA SuperNationals.