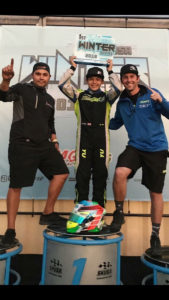 Closing out the 2017 season on a high, California based engine builder P1 Engines entered the 2018 season with momentum. Traveling across the country to the inaugural Superkarts! USA (SKUSA) Winter Series in sunny Homestead, Florida, P1 Engines would kick their season off in fine form taking the victory in the X30 Senior class. Traveling back to their home state for an event two weeks later, P1 Engines powered drivers took top honors in both the X30 Junior and IAME Mini Swift classes at ProKart Challenge California.

“My goal was to start the season off strong and we did that,” explained Jesus Vasquez of P1 Engines. “It is always great to kick off the season with a victory, but to do it on both coasts in the first month of the year is extra special. Also, at the ProKart Challenge California event, I was able to have a driver on the podium in each and every TaG class.”

First on the docket were the opening rounds of the SKUSA Winter Series where X30 Senior driver Dante Yu topped the blocks. As the sole P1 Engines powered driver, Yu qualified second before finishing fifth in a hard fought prefinal. During the main event, Yu and P1 Engines drove to a second place result on track, before being elevated to the victory after a post-race penalty to the winner. In the second round on Sunday, Yu ran near the pointy end of the field and eventually end his weekend with a fourth place result.

Back in California two weeks later, P1 Engines drivers would be on the track during the California ProKart challenge event at Buttonwillow Raceway. In the Micro Swift category, Logan Chambers ran in the top-three throughout the event ending his main event with a third place podium result as well as the fastest lap of the event.

In the IAME Mini Swift class, P1 Engines driver Logan Toke took the victory after avoiding last lap contact by the leaders. Putting himself in the right position at the right time, Toke took the checkers to add to P1 Engines’ growing resume. Fellow P1 Engines powered driver Jackson Menchu overcame some struggles early in the day to join Toke on the podium in the third position while AJ Zarcone closed the weekend in fifth. 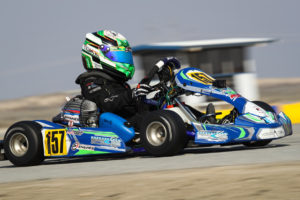 X30 Senior saw Sonny Cervelli and Ramirez ending the main event with top-five results. Cervelli battled in the top-five throughout the event before crossing the stripe in fourth. Ramirez, who missed practice sessions overcoming a mechanical gremlin, passed twelve drivers in the main event to stand on the podium in the third position.

Another P1 Engines victory would come from the X30 Junior driver Alan Tang. Tang has been testing and honing his skills for the past several months and was able to finally put it together in competition. Starting the day outside the top-five, Tang made his way through the heat races, starting the main event on the outside of the front row. In the main event, Tang took the point with two laps remaining and never looked back, scoring his first career ProKart Challenge victory. Tim Meyer Jr. scored a podium result in the X30 Masters division with a solid third place effort.