P1 Engines comes home victorious from round four of the SuperKarts! USA (SKUSA) ProKart Challenge in Santa Maria, California. The California based engine builder earned two wins, four podiums, and four top-five finishes, a strong showing for their driver in their home state.

“I need to express great thanks to all my teams and drivers for another successful ProKart event,” explains Jesus Vasquez, Engine Builder and Owner of P1 Engines. “It is back to work this week prepping for some East Coast competition at the United States Pro Kart Series and SuperKarts! USA Pro Tour events at New Castle Motorsports Park.” 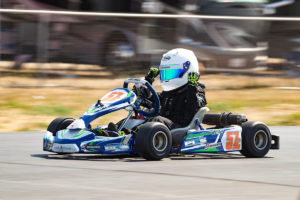 In the X30 Senior category, Dante Yu started his day with a fifth place qualifying run, continuing to battle in the top-five throughout the heats. In the final, Dante fell back to seventh on the start, but drove his way back to the lead on the white flag lap, taking home his first X30 Senior win. Andrick Zeen was forced to come back from a DNF in heat one, driving from 23rd to sixth in his second heat. Zeen gained a few more positions in the final, making his way to the podium with a third place finish. P1 Engines powered drivers Chance Skaufel and Colby Dubato also earned fifth and seventh place finishes in the competitive senior field.

Logan Toke and Ethan Nascimento flew the P1 Engines flag in the IAME Micro Swift division. Logan Toke proved to be untouchable, earning every point he possibly could by sweeping the day and winning the main event by more than three seconds. Ethan Nascimento started last in the main event, but worked his way through the field to earn a solid fourth place finish.

IAME Mini Swift pilot Daniel Inzunza started his day by qualifying in the sixth spot. In heat one, he gained four spots, moving up to second, and found his way to the lead in heat two. Daniel had a solid drive in the main event, taking home a third place podium finish.

In X30 Junior, Oliver Calvo was a solid top-five contender throughout the day. He led half of the main event, but a tough battle would leave him finishing in the fifth spot. In X30 Masters, P1 Engines driver Tim Meyer Jr. had a great showing, driving himself to a fourth place finish in the final.